Scenario A: Dropped balloons of pigmented overlay burst on a concrete slab for a market.

Scenario B: Vertical concrete is cast against a broken tempered glass “form-liner.”

The first of these, “A,” actually happened. I can vouch for it. I was there and witnessed my partner, concretist Kelley Burnham, drop the balloons.

The third thing, “C,” never happened. I was there, under a tent, during a freezing flash flood, with Shellie Rigsby, of Acanthus Concrete Stain Designs, while filming an episode of “Extreme Makeover: Home Edition,” and it definitely never happened, of this I am sure!

All three of these “events” are examples of concrete ideas from outside the box. And whether they actually occurred or not, and if they did, whether they were successful or not, is not really important. What is important is the ideas themselves. All of these represent examples of the concept of sensory concrete, which gives the material a voice. Sometimes the material is the concrete itself, and sometimes it’s the material or the process influencing the concrete. In any case, when gravity is driving the train and a balloon filled with liquid (or a colored semiliquid of a milkshake consistency) bursts, its kineticism can’t be reversed or restrained, only appreciated or cleaned up after.

When a nail is driven through a hole and into a sheet of tempered glass sandwiched between wet concrete and a wooden form, that glass is going to break, and the shape of the cracks and number of shards can’t be predicted with certainty. All that can be predicted in advance is that the glass has a tendency to break (when struck by the point of a nail), and, because it’s tempered glass, it has a propensity to shatter in shards with somewhat blunt edges. And this one is even more beautiful than the balloon drop because it’s more dangerous. It requires a greater leap of faith. By the time the mud gets hard enough for the form to be removed, and the results of the concrete and glass composite are perused, it’s either fantastic or it’s crap. And if it’s crap, it requires a jackhammer instead of a mop to clean up. So Fu-Tung, I have faith in you. I believe … I at least want to believe this actually happened, and no matter what the results, I salute your grace, your guts, and your ability to believe, look into the future and expect that whatever happens will be good.

And Shellie, I salute you for something I’m sure never happened! I’ve always appreciated your work for the same reason I’ve appreciated Fu-Tung’s, because it’s so good and so different from my own. You are both VERY deliberate. Fu-Tung’s work is deliberate, sculptural and very material-oriented. Your own work is also deliberate … deliberate and graphic. My work, and the work of my other concretists, is perhaps more sculptural and materials-oriented (like Fu-Tung’s) and is certainly more graphic (like yours). What it is not is deliberate. I’m not sure I’m capable of the discipline and control that your or Fu-Tung’s work requires. What I am capable of is observing and recognizing the qualities, tendencies and propensities of materials, and creating processes to let these materials do their things. Fu-Tung recognized and created the opportunity for liquid stone and shattered glass to marry and bear new fruit … wet cement paste seeping into thousands of tiny cracks, both defining and melding them … Pretty cool stuff.

Shellie, do you remember that night in the desert? It was an “extreme home makeover” for the ABC TV show, and you had your themed areas and I had mine. They were operating on a really quick and crazy schedule. That was no surprise. We were to have started at, I think, 3 p.m.. We arrived with our respective associates, driving into California and over the border from World of Concrete in Las Vegas. And we arrived as the heavens opened up and flash floods ravaged the venue. We got in. If we’d tried, I don’t know that we could’ve gotten out. So we all huddled together around a folding table in a tent, shivered and waited. I think we may’ve actually started at 3 a.m. instead of 3 p.m. I just remember that it was really cold and really late!

Your themed areas were a kind of zoo and animal hospital/learning center. They involved representative mammal and reptilian graphics – something you’re good at, but very hard to do well in a short period of time. My themed areas were two bedrooms, one with an enchanted forest theme, with watercolor-esque flowers scattered against a grassy green field. This was very natural, and quick and easy to do. Apply a few “on-and-off” variegated passes of paler green dye washes, and then drop really saturated drops of bright flower colors, through pipettes, onto moistened areas of the field. The drops would bleed a bit into the dampness and create what appeared to be flowers swaying in a breeze. A snap of a sensory concrete idea, but nothing new – I’d done this many times before.

The other bedroom was more difficult. It was an undersea theme and the bubbly interior design “talent” had asked for shifting sand strata (this was no problem) in a generally neutral palette (yah, no problem) and lots of (what else would you expect from a bubbly interior designer) bubbles. (Ugh!). Fulfilling this request was a bit tougher. The bubbles were to be in a natural scale. And how was one to create at least hundreds, and perhaps thousands, of small and for the most part circular elements quickly? I was vexed, and the best I could come up with was creating a series of hand-cut paper templates, but I’m a lot better at squares than circles. This didn’t seem like a very elegant answer!

That’s when Shellie came around. She must have been taking a break from her much more deliberate, disciplined and controlled graphic. “How’s it going, Mike?”

“Not so good, Shellie. The concretist is stumped!”

And she listened. And she was quiet. And then she said, “How about putting dye in soapy water and blowing through a kid’s bubble blower?”

Elegant. Absolutely uncontrived and deliciously uncontrollable. Brilliant! I like Shellie’s stuff, but, dare I say, from a sensory concrete standpoint, this idea was the best thing I’d ever heard from her. Unfortunately, it was the middle of the night. No toy stores were open, we had to be done by morning, and so I (ha ha) blew off the bubbles completely. The clients got shifting sand strata in a generally neutral palette with no bubbles, and they seemed to be happy with both bedrooms.

But I’ll never forget Shellie, the queen of mechanical processes and control, and the ease with which she came up with this beautiful solution. Soapy water blown through a loop wants to produce bubbles. It wants to produce lots of them and with ease. And there are no complaints from the soapy water when you add a bit of dye to it. Next, gravity pitches in, as does a draft or a slight breeze. Serendipity! All with such little (if any) effort and no protests. And then the concrete does its job and receives the bursting bubbles, and its porosity allows for the deposition of colors. Elegant, and simple as pie! I’m jealous of you, Shellie … you and your idea! You were like the bubble becoming a bubble or the concrete getting hard, you made it look easy! Perhaps it was because I was the one under the gun and not you? Or, perhaps it was because you’re just that good! 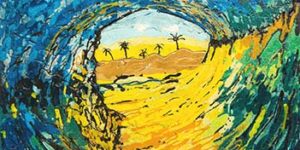