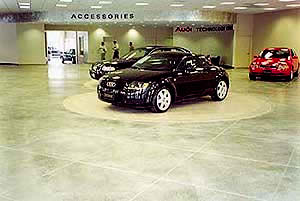 Extreme-sports pioneer Tony Hawk isn’t the only southern Californian to start a revolution with a skateboard.

Sometime in the early 1980s, a concrete contractor named Ed Chiuminatta pulled the wheels off a board and attached them to a Skilsaw. The result? A saw blade that could roll across green concrete, slicing a control joint in a fraction of the time it would take to carve the groove by hand.

Kelly Dickinson, sole proprietor of Superior Concrete & Masonry in Riverside, Calif., says that 10 years ago most jointing was done by hand. “At last some people are starting to convert over to different things,” says. (He should know; he has helped Soff-Cut test and fine-tune saws for years.)

Crack control is a concrete contractor’s biggest headache, Dickinson says, and green concrete saws are the miracle cure. They allow a contractor to do expansion cutting before the concrete has set long enough to start cracking. “It’s as close as you get to a guarantee that you’re going to control crackage,” he says.

Early-entry saw cuts are faster, easier and look better, states Jim Johnson, an engineer who designed and improved the Robo-Kut saw, which is being marketed worldwide by N-E-D Corp. “After the concrete has set there for a day, most cracks have already started,” he explains. “The sooner you can start the better.”

What’s more, he says, the machine slashes labor costs. With the saw’s help, even a rookie can finish off an entire floor the same day it was poured. That’s cost effective, he says, especially on jobs where state regulations require contractors to match union wages when paying the crew.

Because of early-entry saws, Dickinson’s firm can pour more concrete and use less labor to do it. So he’s making more money. In a word, he’s sold. “We’ve got tens of thousands of dollars invested in Soff-Cut saws,” he says.

Soff-Cut dominates its niche, but these days, it’s hardly the only brand on the market. Early-entry saws can be as big as carpet-steamers or as small as electric brooms. They can be powered by gas or electricity. They also vary in features.

The Soff-Cut brand is known for its skidplate, which slides over the concrete on both sides of the blade to prevent spalling or crumbling. 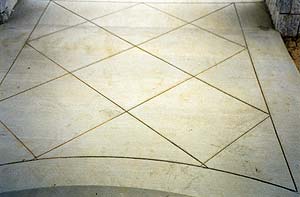 The Robo-Kut saw features torque control, which monitors the load on the motor and adjusts the speed of the blade to suit. “If you run into a hard spot, like a bunch of rocks, it slows and keeps a constant load on the blade,” Johnson says. “The reason why we have torque control is so the operator cannot abuse that saw. He cannot screw up the concrete.”

Soff-Cut blades cut up, while Robo-Kut blades cut down. There are other green cut saws on the market too. A saw manufactured by Rapidcut Industries LLC, for example, is touted as having the ability to cut right to the edge of a wall and be particularly good at making straight cuts.

These options make early-entry saws especially intriguing for decorative contractors, who could use them to offer another cheap, good-looking option to their menus.

Cut with care
But especially when looks are important, experts warn, contractors must be careful when cutting green.

If the machine is pushed across the concrete too slowly, the saw blade can flutter, he says. If the machine stops, it can leave an ugly scar.

Shields recommends getting on to the concrete “as soon as you can walk on it and not leave a wheel-print.”

That’s a crucial distinction — judge by wheel-print, not footprint. The ball of a worker’s foot may exert less pressure (measured in pounds per square inch) than the wheel of a mechanical saw. Harder, smaller tires press the entire weight of that machine onto the concrete at one point. Larger and softer tires, on the other hand, exert less pressure against a given square inch of concrete.

“It’s not how much something weighs, it’s how much surface, what spike you put it on,” Johnson says. “As long as it’s less than the weight of a man, you’re okay.”

Chris Green, partner in Rapidcut Industries, says a contractor can start cutting as soon as the concrete will take a blade without spalling. But if the concrete doesn’t yet have the proper surface strength, the aggregate will pop out, he says — and it can do so even after the job is finished. “On warehouse floors that’s a huge issue,” he says. “They’ve got forklifts going over them and all of a sudden the joints start spalling. It coasts a huge amount of money to fix.” 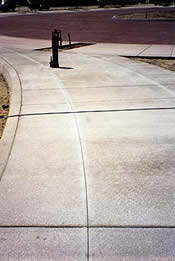 A chaser blade must be used to grind away the damage. Otherwise, it degenerates like a pothole, he says.

Green concrete also requires blades with a harder bond than those typically used with dry concrete, Green says. “Green concrete is softer and more abrasive, so you need a little harder bond. A softer bond will cut through it like butter, but you won’t have blade life.”

Another well-documented controversy surrounding early-entry cutting is whether joints in green concrete need to be cut to the same depth as those in hard slabs. Many say shallower cuts work just fine, and Johnson is one of them. “Cracking is not going to be as big an issue,” he says. “If you cut it early enough you don’t have to cut it deep at all.”

But he quickly adds that, because of liability issues, it’s not a good idea to deviate from ACI standards for hard concrete, particularly if they are specified in the plans. “If the engineer specs it out, the contractor doesn’t do it and it cracks, the person who paid for the job can come back and say, ‘You didn’t cut it as deep as you were supposed to.’” 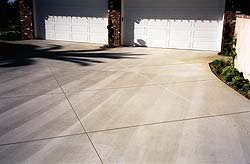 Decorative applications
These tools offer unique opportunities to concrete contractors. “A lot of guys aren’t aware yet that you can do it with a saw and make it look decorative,” Green says.

Dickinson says decorative cutting and scoring is a big market for his firm right now, and early-entry saws allow him to score and cut decorative patterns much faster than he could by hand. Add some staining, and contractors can achieve mural-type effects, he says — circles, patterns, and emblems. “That’s a real popular thing.”

The saws give the cutter more control than hand cutting, making it easier to keep the joint straight and to put it where it needs to go, Dickinson says. With a blade small enough to maneuver, a saw can even be used to cut a joint down the center of a serpentine driveway, in a line that follows the curve of the slab.

Rudy Tena, owner of Tennaco Concrete Inc., a commercial outfit in Eugene, Ore., notes that the saws are cheap enough to just buy and have around for when you need one. “At $3,500, it’s a bargain, really,” he says. But in Tena’s opinion, hand-tooled joints look better than machine cut, even after they are prettied up with a chaser blade. You would see aggregate in the machine cut, he says, and the sharp, angular look is not as attractive to him as a hand-tooled edge. “I would notice it,” he says.

Dickinson agrees that some jobs call for special detailing. “Having the exposed look of a traditional hand tool is pretty unique,” he says. But as contractors become more aware of what green concrete saws can accomplish, the saws are earning their place on more and more job sites. “When you get somebody who’s experienced and they have a feel for it you can do some pretty amazing things,” Dickinson says. 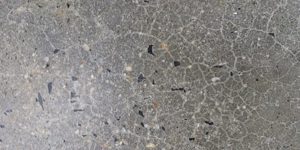 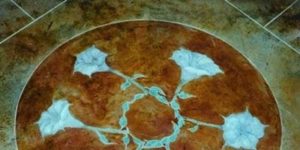