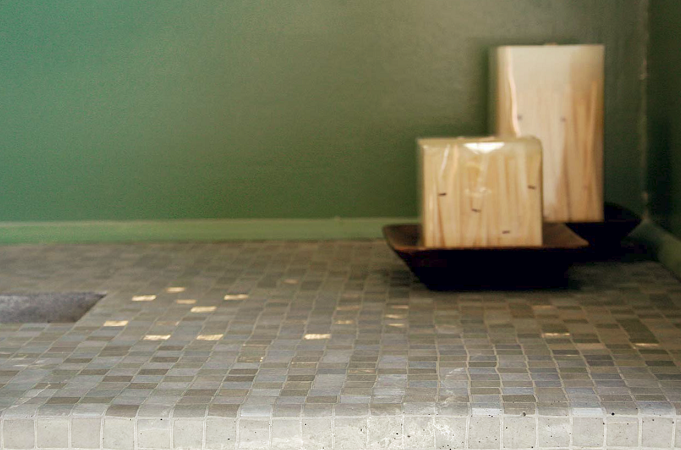 It’s hard to describe enVisions using words alone. The plastic casting mat, which is laid into a countertop form before the concrete is poured, creates a genuinely unique, shimmering visual effect on a concrete surface.

In any case, the end result is a countertop with a pattern that reflects or refracts light. A 5/8-inch enVisions Glass Tile square, for example, contains 63 microscopic grooves, all slanted in one direction with the direction varying from square to square. Concrete, with the proper additives, consolidates into those microscopic lines.

The end result is not dissimilar to the striped visual effect you get when vacuuming carpet. Lines in different squares slant different ways, so light and shade bend accordingly.

The engineering that went into creating the mat is one of a kind, and so are the mix products that help make it work.

The casting mat was developed by PreiTech, with the patent application submitted jointly by David Rainess and PreiTech president Michael Eastergard. The product is currently being imported from Europe, but PreiTech plans to take on manufacturing at its production facility in Georgia. The mats are marketed as part of the enCounter line of products for concrete countertops. The mat was tested using a variety of concrete mixes without success until Doug Bannister developed enFlow, a modifier that improves the pouring properties of his enCounter mix. “The additive Doug had developed produced an amazing finish,” says Eastergard. “Further, because of the strength of the enCounter mix, the microscopic lines held up to abrasion when fully cured. Most concrete mixes cannot withstand the testing we put to the surface.”

Also, enVisions can be cheaper than the alternative. Eastergard says the materials cost $12 per square foot for mix, additives, the casting mat and forms, compared to real Italian glass tile, which he prices at more than $30 dollars per square foot.

Introduced at World of Concrete 2008, enVisions is available to distributors through enCounter’s and PreiTech’s wholesalers. The 15-mil vinyl mats are cut from 150-foot rolls.

As Bannister discovered, the mat does test the ingenuity of mix designers. If a concrete mix is not strong enough, the intricate design might pull away upon release or wear away quickly, Eastergard notes. Also, a countertop poured with the enVisions mat can’t really be properly vibrated.

“It’s clear there is a domino effect as a result of these products,” Eastergard says. “One of the most significant developments as a result of the PreiTech products is that manufacturers are going back to the drawing board on mix design, specifically the admixtures.

“For years it has been acceptable for contractors to build their molds like a fortress and then vibrate like crazy. The realization is that water reducers and plasticizers can eliminate 95 percent of vibrating while strengthening the concrete.” 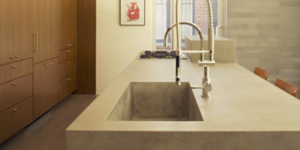 Concrete Making its Way to More Places Than Just the Garage