The shallow, grooved texture left on the surface by a concrete broom or brush will help keep shoes and tires from slipping or skidding on a wet or icy slab.

There’s not much of a secret in how a concrete broom is used, either. For a “broom finish,” contractors pull a broom across the slab, preferably at a right angle to anticipated traffic. Less frequently, they swirl the broom for a “swirl finish,” which looks nicer but requires more work.

The broom’s bristles should be held at a 45- degree angle to the surface, says John Wight, vice president of sales at Bon Tool Co. The tool should be pulled with light pressure appropriate to the job. “It depends on how quickly the concrete is setting up,” he says.

But while brooming is as simple as sweeping, finishing brushes and brooms are not ordinary cleaning brooms. They have unique properties that make them specifically suited for putting a textured finish on a slab.

The bristles of concrete finishing brooms have more consistent lengths and shapes than those of ordinary brooms, says John Strawn, product manager at Marshalltown Co. Consistent bristles mean a more consistent finish, he says. “You’re actually texturing, not working to clean up the concrete.”

The connection between the broom and its handle can be different too. While a typical broom is attached to a handle that is fixed in place, a concrete broom may be bolted to its handle with a “clevis adapter” so it can be adjusted for pitch.

Finally, the typical bristles used in a concrete broom will be softer than those of a standard broom, although the coarsest concrete brooms can be rougher, Strawn says.

“With a finishing broom, you don’t want it too stiff,” says Robert Bower, marketing manager at Wagman Metal Products Inc. “You want to finish, but you don’t want to dig into the surface.”

Ordinary brooms are no substitute. The standard push broom is too stiff and has too much body to make a good finishing broom, says Gary Bolden, president of Marion Brush Manufacturing Co. There are five or six rows of bristle tufts on a push broom, compared to only two rows on a finishing brush, he says. “A lot of times a push broom exposes aggregate. It’s rougher than needed.”

A push broom will also be too heavy compared to a finishing broom. “It digs into the slab, and doesn’t make it as uniform or as level,” Bolden says.

What’s more, finishing brooms such as Marion Brush’s are designed to texture with the sides of bristles rather than the ends, Bolden says. “If you use the ends of the bristles on a slab, it pulls away the cream and exposes the aggregate.”

All about the bristle
There are differences within this niche market too. The most important characteristic of each concrete brush and broom is the bristle itself. “The bottom line is that the quality of bristle drives the quality of the broom,” says Strawn. “A strong, consistent bristle makes a great broom.”

Contractors prize the aggressive texturing of a stiffer brush when slip resistance is more important than appearance, such as on a ramp. The stiffer the bristle, the rougher the surface, says Steve Cook, sales and marketing manager for Kraft Tool Co. “The contractor buys a broom based on the kind of finish he’s looking for,” he says.

Contractors in colder parts of the country often favor stiffer bristles, Cook says. In areas where winter ice coats sidewalks and driveways, contractors must be especially rough on surfaces to ward off accidents. In warmer areas, a soft bristle will create all the traction the end user is likely to need.

Softer brushes will give you a nicer, more aesthetically pleasing finish, Cook says, making them a solid choice where a lot of roughness isn’t needed but looks are important. On the other hand, a stiffer brush may help make a decorative swirl finish stand out. “With soft bristles, you may barely see the brush strokes.”

Wagman Metal Products sells hand-finishing brooms with either plastic fiber bristles or natural horsehair. The hair is embedded in a reinforced base that is molded around each strand. Horsehair bristles are more flexible, Bower says.

Marshalltown recently added three aluminumbacked brooms to its catalog. Aluminum-backed brooms don’t warp, crack, or dry out in the sun like wood might, and they can be lighter than wood too. An aluminum back is “top of the line,” Strawn says — stronger and more durable than wood, but generally more expensive.

Marshalltown has also introduced three new concrete “poly” brooms and an extra-coarse poly broom. Its new medium-coarse poly broom has clear fibers instead of black, making them less noticeable if they break off and fall onto the concrete surface.

Most of Kraft’s brooms use “poly-fiber” bristles because the synthetic bristles are easily cleaned, Cook says. Kraft’s horsehair brooms are significantly softer than poly-fiber and perform differently as well, he says. “Horsehair usually absorbs water, which polyfiber doesn’t. It kind of flattens down on you.”

Bristle count also varies from broom to broom. A cheap broom will not be as “filled” as a more expensive broom, which means that it will wear out faster. On the other hand, a lightly filled broom can get on the concrete a little sooner, Cook says, which is why Kraft sells a specialty broom with just that feature. “The bristles don’t drag the concrete as much.”

Weigh-less Finishing Brushes from Bon Tool Co. are available with replaceable strips of medium or coarse bristles. The medium is recommended for normal jobs, the coarse for fastsetting concrete or a rougher finish.

Strawn says that, ultimately, a contractor may just choose the type of bristle he or she knows best. “It kind of comes down to what they’re taught. That’s usually what they go with.”

Marion’s Chameleon Trac II rope brush is able to finish a large slab of concrete, such as a parking lot, in a fraction of the typical time without stopand- start marks. The “handleless brush” is pulled from side to side. As its name suggests, the Chameleon works with five color-coded brush inserts that have different degrees of softness.

Wagman Metal Products’ broom trolley addresses the same need. Workers stand on either side of a slab and use rope to pull the trolley back and forth. The trolley can be outfitted with either plastic fiber or horsehair bristle brooms, and their angles are adjustable.

A curb and gutter broom, such as one sold by Wagman, is actually two brooms joined at a pivot point. The angle between the brooms can be set to conform to any curb rise. “You can adjust it 360 degrees so you can get any angle you want,” Bower says.

This tool allows a worker to broom-finish gutter and curb in one sweep with evenness virtually assured. “You don’t need to bend down and use a hand finishing broom,” Bower says. “You also don’t need to worry about holding the broom at a consistent angle.”

Wagman also markets a “Concrete Texture Comb,” which delivers a nonskid surface with a uniform rough groove finish. It does the job with tempered spring steel flat-wire tines affixed to an aluminum block. 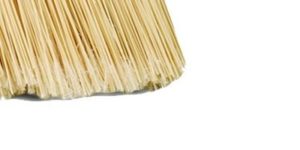 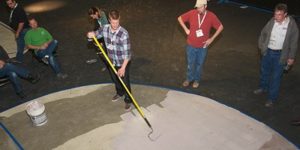 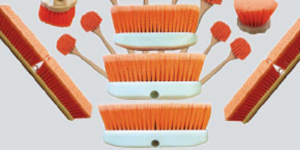