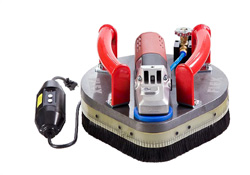 Flex North America Inc., a tool manufacturer with a history dating back to 1922, has built a presence in the decorative concrete industry with its selection of German-made grinders, polishers, grinding discs and concrete mixers.

At the 2010 World of Concrete show, Flex jumped into the planetary grinder market with its first planetary machine, the LCP 1703 VR.

For many decorative concrete contractors, a planetary polisher is a toolbox essential — it’s portable, contains multiple polishing heads and gives surfaces a super-flat finish. A number of tool manufacturers offer a planetary polisher, but Flex president Bob Eichelberg says the LCP 1703 VR stands out in the crowd.

The 29-pound machine has a 12-inch platform made of Duralimin, a very durable type of aluminum, and runs on a 10-amp, GFCI protected motor. It can be used wet or dry (the polisher’s water feed can be turned on for wet applications and off for dry applications) and comes with a brush-style slurry guard. It also has a belt-driven design, which allows it to produce minimal noise, heat and vibration, Eichelberg says.

The machine has three polishing heads that are intended for use with 3-inch and 5-inch diamond polishing pads. Eichelberg says three is the perfect number of heads for a planetary polisher, as they allow workers to polish large surface areas at once without making the machine too cumbersome.

“With three heads, it’s still portable — you can pick it up, you can put it on a countertop, you can carry it around,” Eichelberg says. 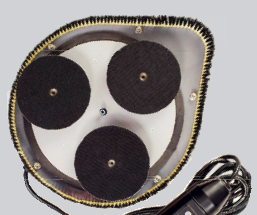 It’s ideal for use on concrete countertops, stairs and small floor areas, such as around pillars and in walkways. Results depend largely on the grit of the polishing pads used. (Workers can use pads with grit levels as low as 50 and as high as 3,000, and the higher the grit level, the less material workers will take off as they polish.) And while planetary polishers are not meant to polish surface edges, this one can get pretty close to them due to the wide positioning of its heads. “We get as close to the edge as possible — more so than others do, based on what I’ve seen lately,” Eichelberg says.

Tom Fischer, who owns Illinois-based Fishstone Studio as well as Concrete Countertop Supply by Fishstone, which sells Flex equipment, has been using the LCP 1703 VR for about a year and says he highly recommends it to other contractors. One unique aspect of the machine, he says, is that helical gears (gears with teeth that are set at an angle) power each one of the heads. Since helical gears operate more smoothly than spur gears, which have straight teeth, the polisher is comfortable to operate, won’t wobble much and lasts longer.

Fischer adds that the LCP 1703 VR is easy to transport and smoothes surfaces quickly.

“It has a quiet and easy operation,” he says. “With its three heads, it speeds up polishing time and gives me a swirl-free finish. And it’s very portable. I can throw it in the back of the truck if I need to, but it’s not too light. If it were too light it wouldn’t polish properly.” 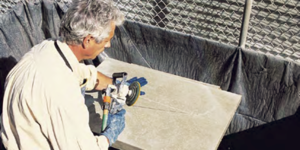 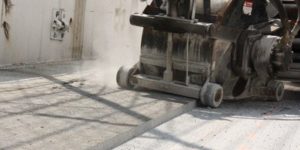 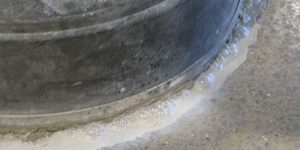 Problems with Curing Compound and Wet-Grind Scratch Rows on Concrete