Although the 2017 Concrete Decor Show was smaller than it has been in years past, it still packed a punch. Held at the sprawling Innisbrook Resort and Golf Club just north of Tampa in Palm Harbor, Florida, it drew participants from around the world to partake in workshops held on the resort premises, a full roster of educational seminars and panels, and a two-day exposition that featured power trowel polishing and artisans demonstrating decorative vertical applications.

The educational sessions this year covered seven different areas: coatings, countertops and cast concrete, hardscaping and vertical, overlays and toppings, polishing and grinding, staining and coloring, and stamping and texturing. Each area of emphasis included a panel discussion and a variety of technical sessions.

“I’ve been to three classes so far and my mind is blown,” says first-time show attendee Julie Bancroft of Opus Stone Concrete in North Carolina’s Outer Banks on the show’s opening day.

To help promote networking and coating technologies education, Covestro was a primary sponsor of this year’s event. The company marked its backing with an exclusive kick-off party the evening before the exposition opened to the public.

Akeem Lennard of Greencrete BVI in the Virgin Islands attended the party with the specific goal of checking out insulating concrete forms for projects he would soon begin. During one of last summer’s hurricanes, “I lost my home and my business but I will rebuild,” he says with confidence.

The eighth show orchestrated by Concrete Decor also included a golf tournament on the recently renovated Island Course, the ever-popular women in decorative concrete reception, and the Decorative Concrete Hall of Fame induction and dinner. The next show, which will become a biennial event, is slated to be held in Texas in 2019.

Power trowel polishing appeals mostly to contractors who have 30,000 to 40,000 square feet or more to polish and a tight time table to do it in, says Scott Thompson of Orlando-based Thomas Concrete Machinery, a Multiquip distributor that supplied the HHXDF5 used in the demo.

“It’s one of the more popular machines we sell because with its propane or gas option it can be used indoors or in semi-enclosed areas,” Thompson says. It’s also equipped with hydrostatic steering so an operator has better control.

The driver of the machine, Matt Smith, a concrete products specialist for Multiquip, notes that the HHXDF5 has two perfectly timed rotors that “maintain the same constant rpm on either side,” which makes it ideal for polishing.

The twin non-overlapping rotors also provide 8 feet of coverage, he adds, which enable it to cover more ground than conventional surface grinding equipment. Helical gearboxes are standard on this model and work at 98 percent efficiency, eliminating problems caused by overheating.

The HHDX5 was coupled with Superabrasive’s Trowel Shine, a power trowel concrete polishing system that gets the job done in five steps. The process began wet with a 100-grit diamond and proceeded all the way up to an optional 1,800-grit polishing step. The time and effort it takes to change pads with this system are fast and easy, Smith notes, and the results are hard to beat.

Maybe that’s why even though they’ve been selling these trowels for years, “All of a sudden polishers’ interest in them has skyrocketed,” Smith says.

“Contractors can adopt this polishing system without undertaking costly or intricate conversions to their equipment fleet,” he continues. “Jobs they previously took a pass on, or instead subcontracted, they can now choose to pursue without additional capital investment in equipment.”

ICFs save on labor and time
At the expo, ICFs were also prominently displayed by Fox Blocks, an Omaha, Nebraska, company with 22 manufacturing plants nationwide. Fox Blocks is also one of the sponsors for the Decorative Concrete LIVE! exhibit at the 2018 World of Concrete that will focus on retail spaces.

ICFs, often hailed as “big boy Legos,” are double-insulated reinforced concrete blocks that can be used below grade as well as above grade for everything from homes to commercial buildings. And just like Legos, they come in an assortment of shapes including straight, curved and corners to accommodate architectural design features.

“Our ICFs are a five-in-one system: concrete form, plastic rebar holders, insulation for wall, furring strip for attaching drywall, and an air and vapor barrier,” says Mike Kennaw, vice president of marketing and sales for Fox Blocks. Instead of having five trades coming in to do work, you’ve accomplished all those steps in one fell swoop. “The labor savings are significant.”

John Riddle, vice president of business development for Turning Leaf Construction in Sanford, Florida, says his company is a Fox Blocks distributor as well as a custom home builder that has been using ICFs for nearly 10 years.

“In Florida, you need something that will stand up to large wind volumes. But even more importantly in this market you need to have properly insulated walls because of our constant warm, moist environment,” he says. ICFs fill that bill with insulation on the interior and exterior walls and concrete in between.

“It saddens me that people keep rebuilding the same way repeatedly although the technology is out there to build structures that will withstand these high-wind and heavy rain events,” says Riddle, who attended the expo to discover other ways concrete products can benefit his company. “It may cost a little bit more to build with ICFs but what is the value of your life?” 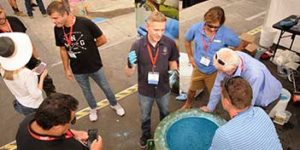 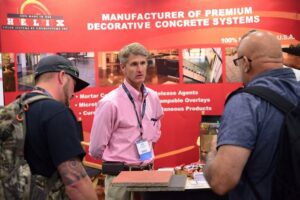