It wasn’t all that many years ago that the popular method for retarding the surface setting of concrete to achieve an exposed aggregate finish was to spray a sugar-water mixture on the newly poured surface.

Sugar? Yes, and here’s why: Sugar molecules attach to hydrating cement and inhibit the chemical reactions involved in the stiffening of a concrete mix. Then the paste can be removed and the aggregate underneath exposed.

Another method, still used sometimes in flatwork, is to spread and roll pea gravel onto the surface of a semi-wet slab, then brush and hose the cement paste away before the slab is completely cured. Either of these methods work, but both have down sides. Too much sugar may inhibit the setting of the entire slab, not just the surface, and it is difficult to control “depth of etch” with a sugar mixture. Depth of etch refers to how deep a surface retarder penetrates – a shallow etch, and less aggregate is exposed.

Spreading and rolling pea gravel has its own flaws. It’s labor intensive and doesn’t allow much wiggle room – it’s often a race against the set time of the concrete. Last but not least, the pea gravel and sugar-water methods can’t be used on a vertical concrete project.

Chemical surface retarders provide a better alternative. Much like sugar, chemical retarders react with the bonding properties of cement and inhibit curing. Because the chemicals can be adjusted and combined, chemical retarders allow contractors more control over surface set time and depth of etch. (Retarding chemistries include lignosulfonic acids and their salts, hydroxycarboxylic acids and their salts, phosphates and their organic phosphonate salts, and salts of amphoteric metals such as zinc, lead and tin.)

Exposed aggregate finishes are popular as a slip-resistant surface and as an attractive decorative touch to a concrete surface. The growing use of retarders to achieve them has paralleled other advancements in decorative concrete technology – first there was utilitarian use of retarders as admixtures for concrete pours in extreme or hot conditions, then use as a surface application on the top surface of decorative flatwork.

Most recently, specially designed formulas of retarders have been released that are applied to forms for vertical applications.

“On-form surface retarders allow contractors to do some nice-looking work,” says J.R. Weiss, owner and vice president of Gamka Sales Co. Inc., a distributor based in Edison, N.J. “I’ve seen it used on bigger jobs like structure walls and panels, as well as smaller jobs such as signage at an entranceway to a business. Big or small, an exposed aggregate finish on a vertical surface looks good.”

What’s more, contractors can get creative with the options available. Different kinds of surface retarders can be combined in clever ways, claims Ed Heller, technical director at RussTech Admixtures Inc., in Louisville, Ky., such as on a job that involves vertical and horizontal surfaces. “Suppose you want steps with an exposed aggregate finish on both the horizontal and vertical surfaces. We would recommend that you spray the vertical with traditional flatwork retarder and use our moisture activated gel-type form retarder on the vertical surfaces.”

An abundance of choices
RussTech’s retarder has all kinds of company. Exposee V, developed by Chem Masters in Madison, Ohio, is another of a number of vertical surface retarders on the market. “Exposee V is thicker than horizontal retarders – it’s more of a gel that is either rolled or sprayed directly onto forms and dries to a semi-hard coating,” says Chem Masters technical manager John Kirk. “When applied evenly, it provides up to 1/4 inch of uniform retardation depth. Contractors have found that it works well for either exposed aggregate finishes or as a surface prep for additional coatings like epoxy, so long as an acceptable profile is achieved. The appropriate time still needs to be allowed for curing prior to coating, usually 28 days. The concrete should be wet-cured during this time, then power washed and allowed to dry thoroughly before coating.”

Grace Construction Products is a company that, like Chem Masters, offers an array of concrete admixtures. Included in its repertoire are two brands of in-form surface retarders, Duro-Tard and Euro-Tard. Grace touts Duro-Tard as having high abrasion resistance, appropriate for more difficult applications such as intricate architectural precast or high vertical poured-in-place concrete. Duro-Tard is available in nine different depths of etch. Euro-Tard is more of an all-purpose retarder, appropriate for architectural precast or cast-in-place concrete. It is available in 10 depths of etch.

Multiple etch depths give users of Duro-Tard or Euro-Tard more tools to play with, says Rob Madore, Grace product manager of architectural products. “They can achieve a variety of different looks by varying the depth. They’re easy to use too – simply spray on two light coatings or roll one thicker coat.”

Pouring walls on the ground
Despite advancements in surface retarder technology, some contractors believe that creating a vertical poured-in-place product with an exposed aggregate finish is more trouble than it’s worth. However, that’s not to say that they don’t see value in on-form retarders.

Nick Carosi III is the president of Arban & Carosi Inc., an architectural precast company based in Woodbridge, Va., that’s been around since 1937. “We use on-form surface retarders for vertical applications fairly regularly, but we typically pour the concrete with the exposed side facing down on a form on which we’ve applied surface retarder. Doing it that way affords the advantages of climate and condition control, as well as the advantage of using gravity to pull the aggregate to the form.”

The same force of gravity that helps a face-down pour creates problems when pouring in place into vertical forms, Carosi says. “When you have a vertical plane, the aggregate will tend to migrate to the bottom no matter how you vibrate the concrete. As a result, you’ll have more aggregate exposure on the bottom of the wall than on the top.”

Mike Ferreri, president of Ferreri Concrete Structures Inc., in Albuquerque, N.M., uses similar methodology to that of Arban & Carosi. “We’ve found that the aggregate tends to stack when you pour in place vertically. When we want a vertical plane with exposed aggregate, we pour with that side facing down on a form with surface retarder, heat-cure it, flip it the next day and expose the aggregate with a 2,000-psi pump and power washer.”

Why not simply pour a horizontal slab and use surface retarder on the top surface instead of going through the extra work of flipping and stripping? Carosi cites gravity again. “By pouring face down, you get a more even and better defined dispersal of aggregate,” he says.

A place for pour-in-place
All that said, Ferreri doesn’t discount the idea of achieving a high-quality exposed aggregate finish by pouring-in-place. “I can see how it can be done. I would probably use a self-consolidating concrete to eliminate the need for vibrating and the resultant aggregate stacking. You would have to be very aware of the set time as well. Strip the forms too early and the concrete might slump. Strip them too late and you’re probably looking at sandblasting and acid washing.”

T.B. Penick & Sons Inc., based in San Diego, constructs vertical walls with exposed aggregate by pouring in place. Project manager Victor Klemaske confirms that this is not a simple process. “When you pour in place with on-form retarders, there is no room for error. The concrete has to be able to hold its own weight before the forms are stripped. Pulling the forms is a pretty exact timing issue.

“By pouring in place, we save in the cost of form materials and labor hours and we’ve discovered that it allows us a little extra decorative latitude,” Klemaske says. “We can paint the on-form retarder in whatever patterns we want and that transfers to the design of the finished work, and we can achieve anything from a light sandblast appearance to an exposed aggregate finish. For a really tight finish, we strip the forms and spray on a surface retarder before the concrete is completely cured.”

T.B. Penick holds the finer details of its techniques close to the vest, citing proprietary concerns. Company artisans use a variety of methods – on-form retarders, surface retarders, even shotcrete with retarders – depending upon the job requirements and the desired finish. 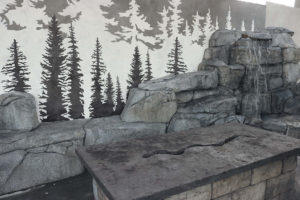 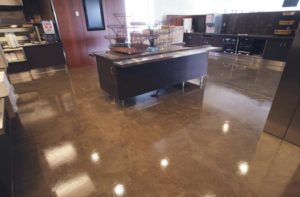