Job Site Safety is My Priority. That’s what we have printed on the T-shirts we are giving away at our booth inside the Decorative Concrete LIVE! arena during the World of Concrete in Las Vegas Jan. 17-20.

Safety is a new priority at Concrete Decor magazine and it has a lot to do with an important lesson I recently learned. Unfortunately, it came at the expense of another individual who, in the eyes of most, would be considered one of the concrete industry’s most respected craftsmen. It all started with a prospective cover photo we were considering for Concrete Decor magazine. Of the six of seven covers we were considering, this one stood out as it had that special look and feel every publisher wants on the cover of his or her magazine. There were others, but I thought this one needed to be seen by the eyes of a friend and colleague to get some feedback.

The response took a few days to hit my inbox but when it did I can honestly say I was shocked. While there was some degree of appreciation for the photo, it also came with a request to not use it in any future issues of the magazine. What came next was even more sobering. The laborer photographed on this proposed cover shot was being put on suspension from work without pay for one week. If that wasn’t bad enough, he also wrote that the worker would be fined $200 from future bonuses for not wearing a hard hat on the job site, and another $200 dollars for not wearing safety glasses onsite. Man did I feel like a crumb!

A day later and some time to think about this problem I had caused, I sat down and wrote an email to my friend and shared my feelings about the situation. Again, I got a response I didn’t expect — although, I will say I was getting the feeling that any further discussion would not shake this individual’s position on the matter. That feeling was correct. This was a matter of job site safety. It was a commitment the company had made to its people and a commitment its people had made to the company. There were no exceptions or any wiggle room on this matter — none! I learned that day that my decisions, committed as they are to promoting this industry of decorative concrete, can have adverse effects on others if my staff and I are not paying attention to these important details.

To this end, I’d like to challenge everyone who reads this post to dedicate themselves and their company to job site safety starting today. It’s not going to be easy. It may, in fact, put you in a position where you’re faced with penalizing or even firing one of your best employees for ongoing infractions that your team has committed to upholding. But as my friend and colleague shared, it’s a commitment to send workers home safe to their families each day.

Want to learn more about implementing a safety program for your business? You’re in luck! This colleague (and friend) I have the honor of knowing is Mr. Byron Klemaske. You’ll find him at the 2017 World of Concrete and at scheduled times in the Decorative Concrete LIVE! arena. You may know him already, but for those who don’t, he and his wife, Chris, lead one of our nation’s top architectural concrete companies, namely T.B. Penick & Sons.

The way I look at it, job site safety standards add a measure of reliability and confidence to our employee and customer relationships. They improve productivity and profits. And if it’s working for the folks at T.B. Penick & Sons, I believe it can work for Concrete Decor magazine and every other construction company out there.

So, let’s do this! Let’s commit to jobsite safety. I think we’ll find that it not only adds competitive advantage, but it’ll help us influence the world around us in a powerful and positive way. Concrete: A Building Material for the Energy Conscious 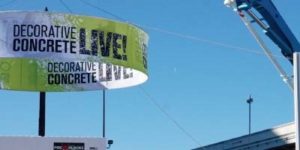 Welcome to the Mall of Concrete at Decorative Concrete LIVE!