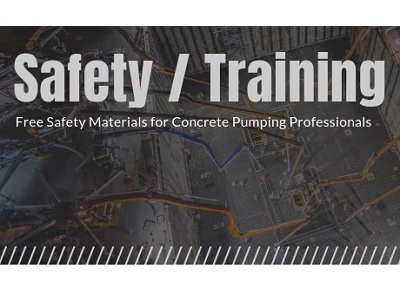 The campaign highlights the responsibilities of each trade working with or around a concrete pump under the standard. The ultimate goal of the campaign is to keep every person on a job site safe.

“The ACPA saw an industry need to ensure that everyone on the job site has a clear understanding of their responsibilities under the ASME B30.27 standard,” said Christi Collins, executive director for the American Concrete Pumping Association and member of the ACPA Job Site Safety Committee. “Our goal of this campaign is to encourage partnering across all the trades because, when we all work together, we create a safer environment for everyone.”

The cornerstone of the campaign is a new microsite—WeAreSaferTogether.org—which provides and promotes valuable information to all who work with or around concrete pump equipment. The microsite serves as an educational resource to familiarize all parties with the standard and provides videos, downloadable flyers, job site responsibilities by trade, FAQs and much more.

The B30.27 standard is intended to prevent or minimize injury to workers and otherwise provide for the protection of life, limb and property by prescribing safety requirements. It provides direction to manufacturers, owners, employers, users and others concerned with or responsible for its application, and guide governments and other regulatory bodies in the development, promulgation and enforcement of appropriate safety directives.

Since its first publication in 2005, the standard has gone through several reviews (every five years), with revisions including the addition of a competency requirement, the definition of “signalperson” and job site responsibilities. While the most recent version of the standard, published in 2020, includes some revisions and redesignations, there were no changes to the job site responsibilities established in the 2014 version.

“By raising awareness and providing valuable resources, this campaign will help construction trades prevent accidents, protect their workers and partner together to heighten safety awareness for everyone on a job site,” said Tabah Nez, safety director for the ACPA. “We are most efficient when everyone is armed with knowledge and then gets involved in the planning process.”

Today is just the beginning for this campaign. Throughout 2023 and beyond, the ACPA will continue to expand the campaign’s impact by inviting associations and organizations across all trades to join in and support this important effort. In addition, the microsite will be regularly updated to provide content and resources that will educate, encourage and empower those on job sites to do their part to keep everyone safe.

“The success of the campaign is dependent on the collaboration of many,” said Collins. “We are thankful for the industry leaders, including the American Society of Concrete Contractors, Concrete Foundations Association and Tilt-Up Concrete Association, who have stepped up to support this campaign. Together, we will raise awareness and help create a safer work environment for everyone.”

To learn more about the campaign, please visit WeAreSaferTogether.org.

The ACPA is a nonprofit association that serves as an advocate for the concrete pumping industry committed to promotion, education and safety for its members and all those coming into contact with a concrete pump on the construction job site. For more information about the ACPA, visit www.concretepumpers.com.