Contractor Works His Magic While Facility Conducts Business as Usual

Julio Hallack isn’t really a magician. Still, what else can you call a contractor who pulls off the nearly impossible: completing a 25,000-square-foot pool deck restoration for the ritzy Claremont Hotel Club & Spa while the facility remained open?

Further complicating the process was a concrete pour whose cure time alone would have made it difficult for Concrete by Hallack to complete the work on time. However, rather than relying on spells or incantations, Hallack was able to successfully complete the project thanks to good advanced planning with the owner’s consultants and contractor, his continued presence at the jobsite and the use of several products from Miracote Products’ line.

The consultant who was handling the resort restoration was given the name of Hallack’s Turlock, California-based crew by a swimming pool company that knew his work. Hallack’s business, with almost a quarter century of experience, has a reputation for delivering exceptional results on both residential and commercial concrete restorations. “I was interested in the job because of the challenge and opportunity it presented to me, and the type of client,” he says. “I also knew there were not many other contractors who were willing to deal with the challenges.” 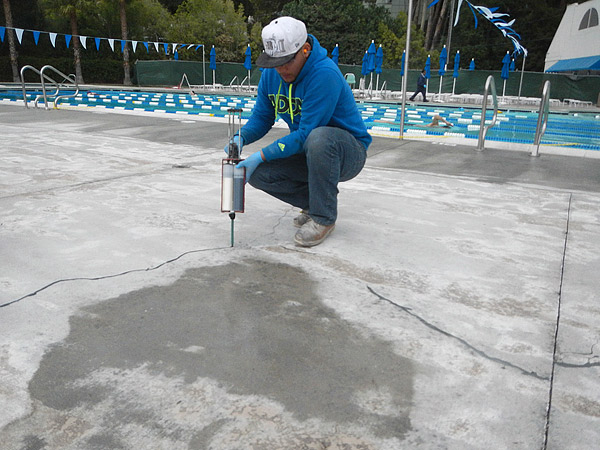 Reputation wins out
Hallack’s reputation served him well. Not only did his company get the job despite not being the low bidder, but his input was accepted when it came time to choose both a coating company to supply the job and determine how to stage it. “The managing contractor was familiar with another coating company that I am also familiar with, but allowed me to make recommendations,” he says. “After walking the project and learning from the client what they were looking for, I contacted Trevor Foster with Miracote to exchange ideas.” 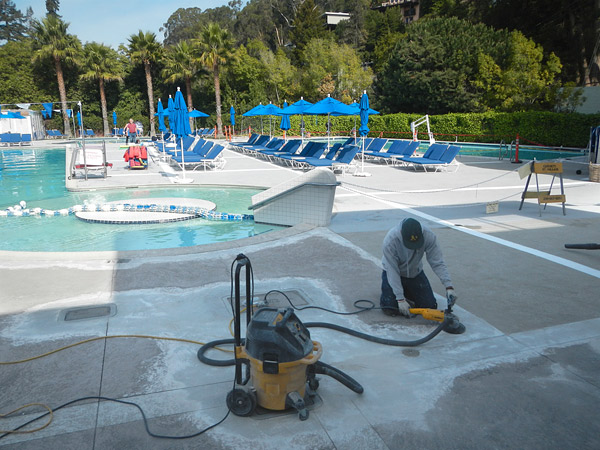 Foster, the western sales manager for Miracote, a division of Crossfield Products Corp., says once he saw the job and talked with Hallack, his job was to make product recommendations based on Miracote’s experience with similar West Coast projects, as well as provide case studies to the contractor. “Our job is to make sure there’s a good partnership between us as the manufacturer, the contractor and the end user,” says Foster. “We want them to feel comfortable they have support from all sides, both for the installation and for warranty reasons. We back each other up.” 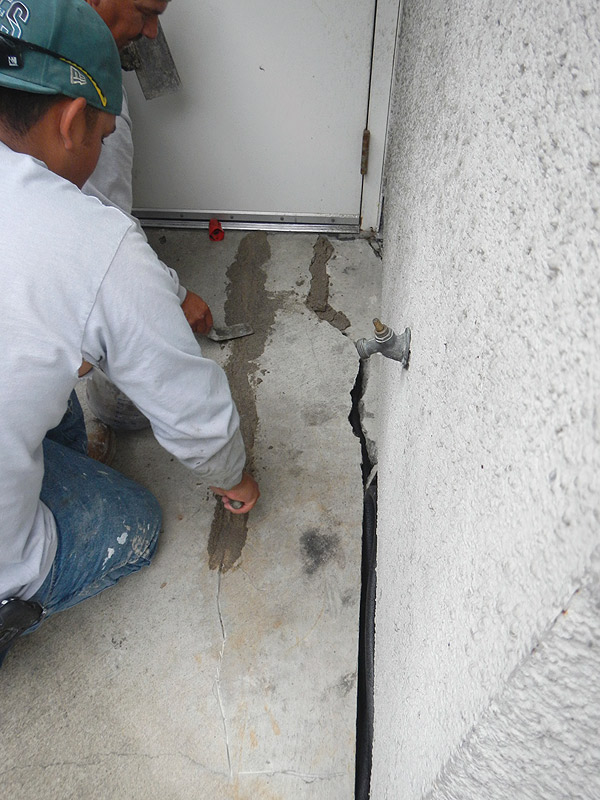 Both men acknowledge that Miracote is more expensive than the managing contractor’s recommendation but, says Hallack, “Miracote is one of the oldest coating companies, and my company has been working with them going back to the ’90s. We’ve installed other coatings, but feel more comfortable with Miracote.” 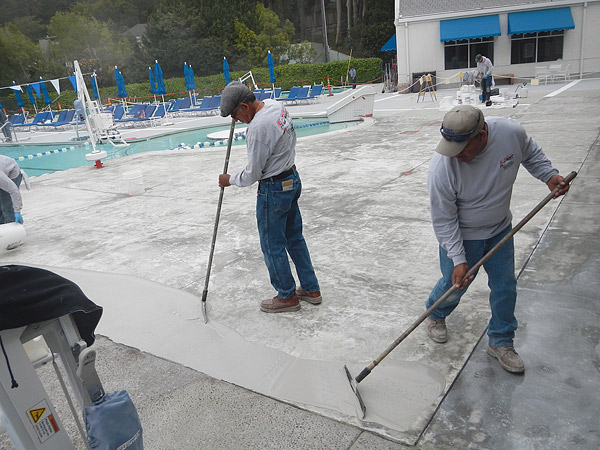 Scope of the project
One big challenge was getting the right shade of white for portions of the job, which included overnight shipping samples from Miracote’s Rancho Dominguez, California, manufacturing facility to the Bay Area. “People will often see a swatch that’s 1-by-1 inch, but we like to send samples that are at least 2-by-2 feet so the owner can get a good feel of what it looks like against their cut wall or their coping stones or against a painted surface,” Foster says. “And, any commercial job like this is difficult because you have multilayers of decision-making.”

The scope of the project was also astounding. Leading the way was removing 23,500 square feet of existing coating. Much of the area needed to be repaired or the concrete leveled. Additionally, the 25-yard lap pool had to undergo a hydraulic injection to compensate for an 8- to 10-inch settlement after the 1989 earthquake. All the concrete around it had to be removed and poured anew.

The structural repair work on the lap pool, which required it to be shut down, perhaps best indicates the other major challenge Hallack faced. Not only is the Claremont one of the oldest hotels on the West Coast, but the spa also has many members who use its facilities. For that reason, management decided it wouldn’t close the spa while work was being done.

“The construction management company and hotel management presented a plan to us to do the restoration in nine stages,” says Hallack. “I knew I had to make changes to their recommendations to still comply with allowing the members to use the facilities. I presented a request to do it in six stages, and that was accepted and worked well.”

Even so, the company was allowed to work only from 8 a.m. to 5 p.m. And, Hallack had to close the section being worked on, installing barricades and asking members not to walk in the construction area. One of the consultants on the project expressed concern about minimum application temperatures when the work was being done in February and March. Hallack agreed that temperature might be a concern when sealers are applied, but the polymers perform even when temperatures are in the 50s. 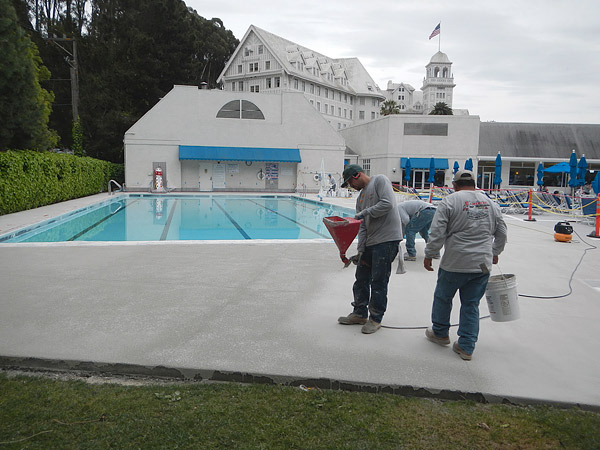 Much of the work was completed using Miracote MPC, a dual-component polymer-modified cementitous overlay. Other products included MiraPatch RM 1, MiraGard HD 100 and MiraGard Colorbond XL (a custom bone white) to color and seal the deck.

Challenges continue
Perhaps the greatest challenge, though, might have been the new concrete pour around the lap pool, which originally had a 28-day cure window. Foster says that Hallack knew exactly which Miracote products he wanted to use for other parts of the project, but for that area of the deck he turned to Foster for a recommendation. He, in turn, suggested a fairly new product: MiraPrime Aqua-Blok XL.

“We worked with the concrete contractor and specified a certain mix which was a low-water-to-cement ratio that supports a quicker cure,” says Foster. “Then, Julio applied the Aqua-Blok, which allowed him to coat the new concrete much quicker than industry standards.” 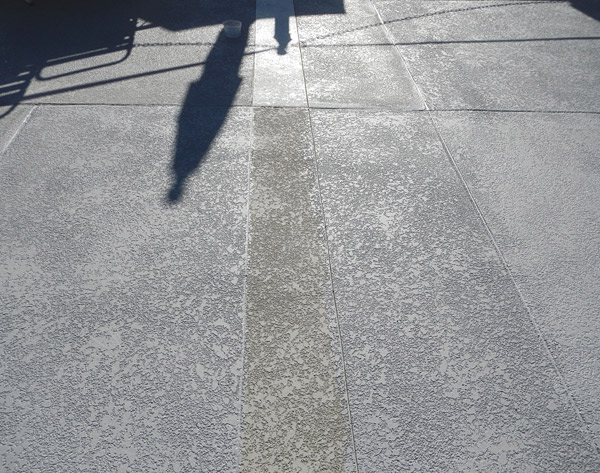 The combination took the time down to where the concrete was cured enough to coat in seven days. In the end, Hallack says the most difficult part of the job was dealing with members who were tired and frustrated by the ongoing noise, dust and construction. To counter that, Hallack hired one new employee, bringing his onsite team to six, including the boss. “I told the members construction restoration is noisy and dusty,” he says. “We worked with lots of efficiency and planning. I met with my staff every day and planned the work. Everybody knew what they had to do.”

And, while it probably isn’t a job that every company can take on, Hallack says in the end, he’s particularly proud and appreciative of his staff, and grateful to the management construction company and hotel management and staff for making it work.

Scope of project: Restoration of 25,000 square feet of pool deck, some of which was damaged in a 1989 earthquake. Repair cracks and drains, level concrete, and color and seal the deck.

Most challenging aspect: Stage the jobsite so that adults and children could continue to use the facilities while the work was being done. 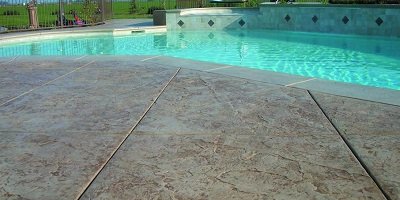 Now that you’ve learned how to stamp and stain, it’s time to give some serious thought to the design of your projects.