The American Concrete Institute recognized the winners of its inaugural Excellence in Concrete Construction Awards during the ACI Awards Gala at the Concrete Convention & Exposition, Nov. 9, 2015, in Denver, Colorado.

The awards, designed to honor the concrete industry’s most creative projects, recognize concrete innovation, technology and excellence worldwide. To be eligible to participate, projects must have won a competition at a local ACI chapter level and been submitted by that chapter or one of ACI’s international partners.

An independent panel of industry professionals judged projects and selected winners based on architectural and engineering merit, creativity, innovative construction techniques or solutions, innovative use of materials, ingenuity, sustainability and resilience, and functionality.

The winning projects were selected from among several possible categories, with a first- and second-place award available in each, as well as honorable mentions. 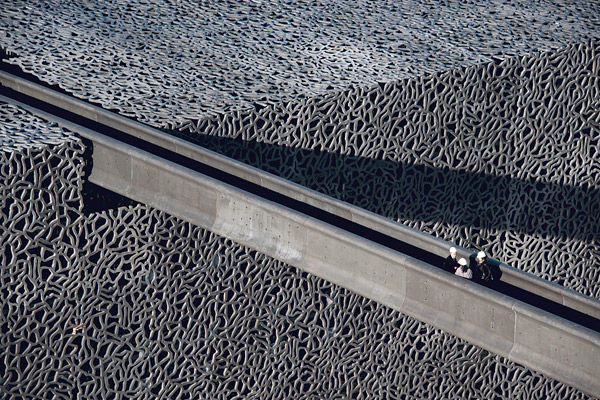 The highest honor, aptly named “The Excellence Award,” was presented to the Museum of European and Mediterranean Civilizations (MuCEM) located in Marseille, France. Selected for its outstanding concrete innovation and technology, the icon of urban rejuvenation is situated on the banks of Marseille’s 2,600-year-old harbor. With exhibitions on three of its floors, the MuCEM was visited by a whopping 3.4 million people during its first 15 months. The facility houses the first French national museum outside of Paris.

Winners of the remaining awards are:

At the end of a historic pier where immigrants from Mediterranean countries once landed, the MuCEM resembles a veiled cube that’s linked to the city via two narrow footbridges. Wide exhibition halls are surrounded by a sheltered promenade that extends upward to the rooftop terrace.

The MuCEM represents an outstanding architectural feat achieved with ultra-high performance fiber-reinforced concrete (UHPFRC) applied in large scale to a building to widen exhibition spaces, minimize material consumption and provide shelter while letting in abundant natural lighting. Notable features include 330 tree-shaped columns that support vertical loads and surround the exhibition building, 380 lattice panels that support each other for the facade and 230 precast I-shaped beams within the main building above the exhibition halls. These beams are designed to hide an array of mechanical equipment yet keep it accessible. 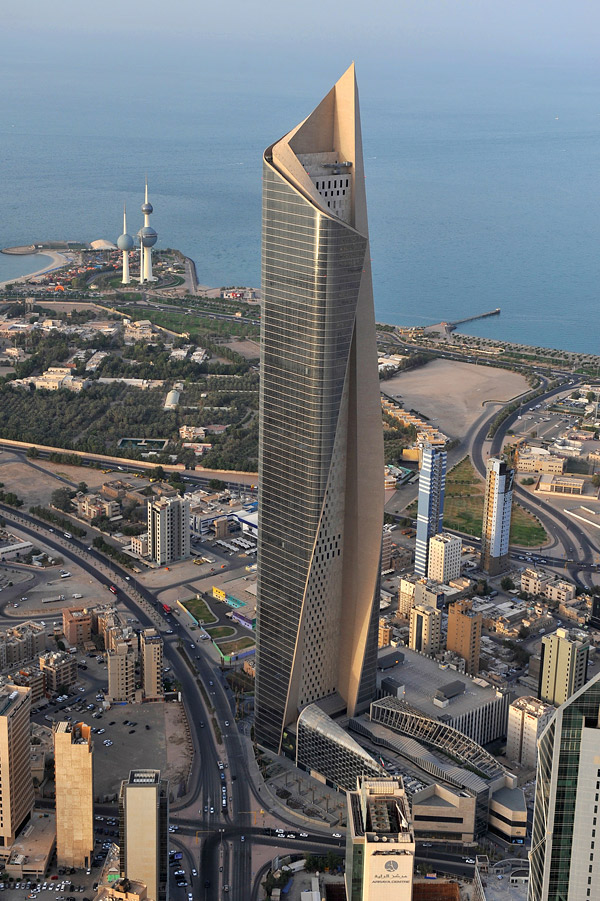 The tallest concrete structure in the Middle East and the nation’s tallest skyscraper, the Al Hamra Business Tower occupies the site that was once home to Kuwait’s first cinema. The mixed-use development features the business tower designed by the renowned U.S. firm of Skidmore, Owings and Merrill, a luxury center with a built-up area of almost 66,500 square meters and an 11-level parking garage with 2,000 spaces. 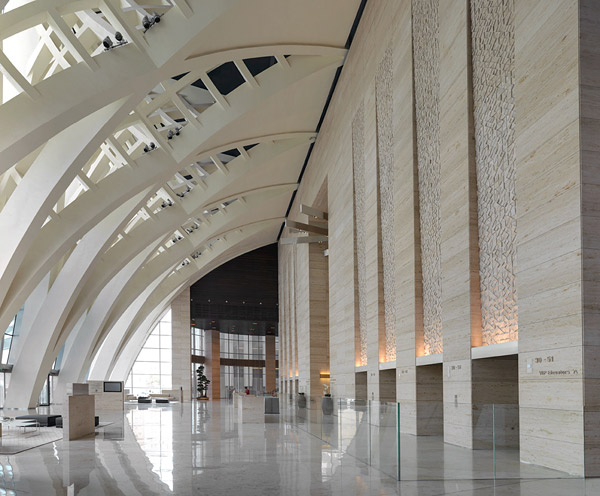 The project used self-compacting concrete ranging in strength from C-40 to C-80 N/mm (Newton/millimeter). Huge pumps had to get the concrete to the top of the project in less than 15 minutes because of the extremely dry weather. For the foundation and part of the substructure, the SCC mix was proportioned with reduced-size coarse aggregate, increased paste content, super-plasticizer and air-entraining admixtures.

A stadium originally built in 1925 in a prominent residential district in Paris no longer met today’s rugby’s requirements, so a new Jean Bouin Stadium was built. The 20,000-seat facility, which opened in 2013, has three floors below ground level and two to six levels above. It includes a gym, an underground parking garage and office space. An ultra-thin envelope of UHPFRC, that undulates like a giant wave, covers the entire building like a giant 3-D jigsaw puzzle.

The 3,600 triangular pieces of UHPFRC serve many purposes. Some are built with 30 percent voids to allow light to pass through. Others provide a transition toward the roof panels. And still others serve as structural roof panels. The beauty of this design is that the facility uses a single construction material, UHPFRC, where traditional construction would have required four components. The structure is guaranteed a 100-year lifespan. 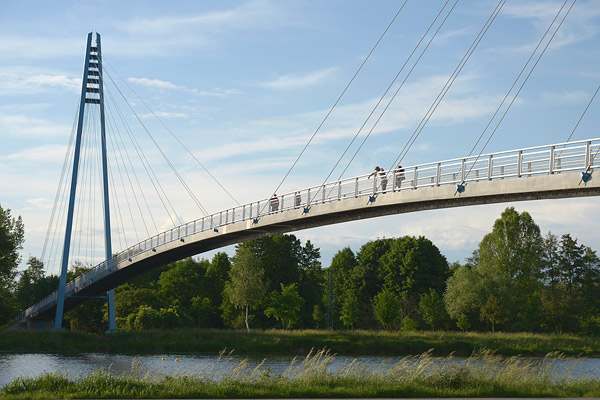 The award-winning footbridge over the Labe River in Celakovice, which connects the town with a popular recreational area, was built to support pedestrians, cyclists and emergency vehicles. It is the first structure in the Czech Republic which has a superstructure — in this case a segmental bridge deck — made entirely of UHPFRC and supported by fully locked cable-stays. The deck slab is only 60 millimeters deep and no bar reinforcement was used.

Using local materials and high-strength steel fibers, the developed self-compacting concrete mix kept its workability for about 90 minutes, which allowed the UHPFRC to be applied in the form of ready-mixed concrete. The project was assembled very fast, taking only a month to complete the main span above the river. The considerably lightweight footbridge is expected to last more than 120 years with limited maintenance. 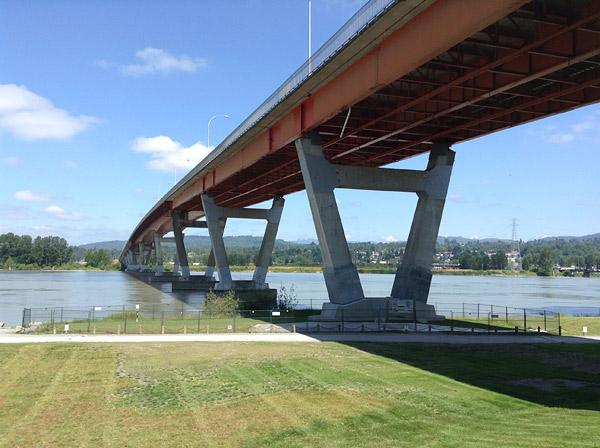 The Mission Bridge — a four-lane, 1-kilometer-long major crossing of the Fraser River in British Columbia, Canada — was structurally retrofitted and had ground improvement work completed in 2012 because it was in a high seismic zone and was a critical link in the province’s disaster recovery network. The remaining retrofit task involved densifying soils with compaction piles but a trial contract demonstrated piles wouldn’t be effective. Traditional column jacketing with elliptical steel was an option but would cost too much. An innovative column-jacketing approach using UHPFRC was selected.

The method not only saved $1.5 million but the ultra-thin jacket was unobtrusive aesthetically, met technical demands when it came to seismic standards and eliminated below-ground risks from piling. This project demonstrated the unique properties of UHPFRC to solve significant challenges in the seismic retrofit of large concrete columns. 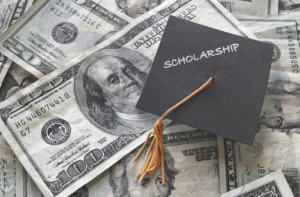 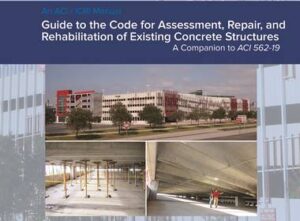