Joint Ventures: Deciding to Use Fillers or Sealants to Finish a Concrete Job

Call them fillers or call them sealants (people often use the terms interchangeably), but it’s a good bet if you’re involved with concrete work, you’ve run into determining what to do with the joints.

On a vertical surface, the answer is easy: use a non-sag sealant to keep moisture from migrating through the concrete in either direction. For horizontal work, the answer is a bit more complicated since jobs done properly will have saw-cut contraction/control joints and construction joints.

Those joints, which control where the concrete cracks because of stresses from the drying shrinkage process or from changing climate conditions, should prevent cracking from occurring randomly throughout the slab. However, joints also create interruptions on the surface and can have negative consequences, from trapping dirt and food in kitchens to evolving into the reason for a bumpy ride on a warehouse forklift.

That’s why you need to know the differences between fillers and sealants and to choose the correct product for each application.

Flexible or rigid?
Doug Swanson, general manager of the Ontario, California, office of Hi-Tech Systems, says with sealants the focus is primarily on keeping dirt, debris and moisture out of a joint.

“It’s especially important to keep water out of the joint in case it would freeze and then expand and blow out the joint,” he says. “Sealants are typically applied in a very thin cross section so they can stretch laterally. A sealant is like a rubber band. It’s flexible but a high heel might go through it.”

By comparison, a filler is more rigid. Swanson says one of his most-popular fillers is an 85 on the Shore A Hardness Scale (sealants typically have Shore A hardnesses in the 20-35 range).

“It’s harder than the heel of a shoe, but it remains slightly flexible,” Swanson says. “Its main purpose is to stay somewhat rigid at the surface so you can drive over that joint with a forklift or a dolly — something that has hard wheels on it and a heavy load — without crumbling those weak edges of the joint.”

Based solely on that, it seems easy enough to pick the right product for any job. However, as with so many other things, the devil’s in the details. Is the job indoors or out? Has the concrete had time to cure? Is it in a controlled environment? Will it be polished? Does it need to be color-matched?

Fortunately, there are also several different materials available to meet those varying needs, and research is continuing to improve the options available.

“Most exterior applications are only a quarter-inch deep and that’s typically applied over a backer rod which is soft foam,” he says. “That way they can get the maximum movement from the thermal dynamics going on in the atmosphere.”

And, while it’s easy to think of exterior projects braving the elements on their own, Andy Tam, general manager of W.R. Meadows of Texas, based in Fort Worth, says that can be shortsighted. Allowing water to get into an open joint can eventually erode a project’s subgrade.

That also doesn’t consider such concrete projects as parking lots, where an inadequate expansion joint can mean a very bumpy ride or lead to abutting slabs lifting each other.

Indoors offers nothing quite so dramatic, but the needs are much the same. Brian Bowers, owner of Huntington Beach, California-based Solid Solution Products, says sealants should seal “to prevent anything to pass by.”

Often, though, that isn’t enough. Heavily trafficked areas also need something to protect the joint edges. Polyurethanes don’t typically provide the support for load transfer and can lead to joint edge damage or “spalling” over time.

Polyurea offers other options
Fortunately, in the early 2000s, manufacturers began developing fillers made from polyurea, which can offer protection along with greater flexibility.

“An epoxy joint filler might have only 3 percent to 5 percent movement, but a polyurea can give up to 15 percent lateral movement,” he says. “When you fill a joint with polyurea, it won’t always crack. We want not only to use it as a joint filler, but we also want the sealant aspect.”

That’s not to say that epoxy joint fillers will always crack, or that polyurea is the sole best answer to the joint protection question for a couple of reasons. Scott Metzger, president of Concord, New Hampshire-based Metzger/McGuire, says that on exterior applications it isn’t going to hold up to the elements or accommodate joint movement as well as other options.

Also — unlike other options — moisture sensitivity means it’s not ideal for every job.

Solid Solution Products’ Bowers says when polyureas were first developed, their reaction time was so fast, it could cure in five to 10 seconds. Despite improvements to their chemistry, the formulation’s two parts still can’t be mixed in a cup or bucket.

VersaFlex’s Harvey says, by comparison, silicones or polyurethanes can cure slowly enough to present other difficulties.

“It can take anywhere from six to eight hours before they cure,” he says. “If it’s outdoors, you can get dust and leaves and other debris that will blow into it and stick in the joints. It’s often prudent in those situations to do something that will protect the surface.”

Sure cure
In indoor settings, many contractors choose to let silicones or polyurethanes cure overnight before continuing work. Inside jobs offer one big advantage for filling and sealing joints: once the HVAC is turned on, they’re curing under controlled conditions.

Inside or outside, adequate cure time is important before installing the filler or sealant. It’s strongly recommended to allow the concrete to cure for at least 30 days before filling or sealing. Longer is preferred.

The first 30 days is when the most moisture is going to be exuded, says Hi-Tech’s Swanson. “Even if you fill in 30 days, you run the risk of the slabs continuing to shrink and the joints to get wider.” That’s why this work is often done by contractors who specialize in sealing all aspects of a building, rather than the concrete contractor.

Of course, available chemistry also offers work-arounds for inconvenient concrete curing times. Tam, for instance, notes that W.R. Meadows offers polyurethane sealants that can be applied to “green” concrete, which can be described as new concrete that’s firm/hard, but not yet fully dried or cured. This concrete, he says, will appear to be green in color because it still has moisture in it.

“We see this a lot in parking lots,” he says. “They want the work done, they want to get in and get out and they’ll use a non-bubbling product.”

Application issues
Dealing with green concrete isn’t the only application issue contractors may face. For instance, epoxy fillers and sealants can stain the surrounding concrete unless a masking agent is used. And, Metzger/McGuire’s Metzger says, masking is often a good idea for any job.

“It isn’t always necessary to mask the edges of the joint if you’re using a polyurea, but quite a few installers do it just as a protective measure,” he says. “There are roll-on products that are water soluble, but you can also use painter’s tape or concentrated liquid dish soap. If I was doing the job for a high-end project, I’d do it as a precaution.”

There’s also the matter of color matching on colored floors, and while the suppliers say it isn’t necessarily difficult, different approaches can be taken.

Manufacturers offer different standard colors. Some can make a product to match a paint chip or color card if the job is large enough to warrant manufacturing a sufficient-size batch.

“Our approach is we make a clear base, but we also make an off-white base where the contractor can add color to it,” says Kelton Glewwe, vice president of operations and marketing for Roadware in South St. Paul, Minnesota. “Anything that’s dry or granular will work: Solomon Colors, pigmented colors, the color of the sand you used. It just takes a pinch. It also takes a little experimentation, but you can get close to about any color.”

How to Protect Concrete During Construction 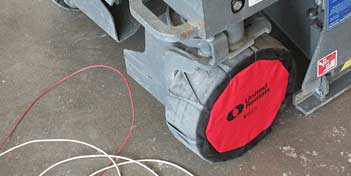 Polished concrete as a finish is reliant on the concrete substrate to be in good shape to provide the end user with a beautiful and durable finish. Owners don’t like blemishes and amazingly the worst issues seem to happen in the main entranceways. Here, I’ll address the most common issues in order of their likelihood of happening.

Filling the Joint in Concrete 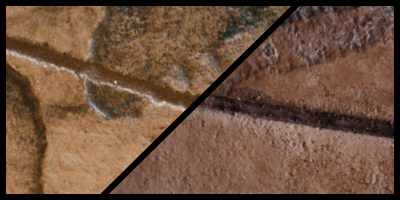 Not long ago my wife and I were having dinner at a well-known chain restaurant when we noticed that hundreds of feet of saw cuts had been left unfilled. I'm guessing this had to be a health issue. If nothing else, it made the floor look unfinished, to say the least.