When Southern California landscape company The Green Scene was hired to develop a waterscape for the Babb residence in Calabasas, Calif., president Scott Cohen says the challenge was to create a rustic backyard in the middle of a desert on an up-slope lawn.

Waterfalls are gaining popularity among homeowners who are looking to bring a touch of nature to their backyards, jazz up an in-ground pool or spa, or add a unique element to outdoor entertaining. However, contractors interested in diving in should know that waterfall installations are not simple projects.

Several items and factors need to be addressed when designing a water feature for a setting, says Paul Gustafson, project coordinator for Lakeland Co., in Rathdrum, Idaho. "The scale of the feature within its surroundings, whether or not it is designed as a focal point or creating atmosphere in the fore or background, the line of sight and desired viewpoints of the feature, as well as the size, style and color of the rock work all need to be considered," he says.

Climate has to be considered as well, he says. "A water feature built in a colder climate has to be designed with winter in mind. If designed properly, some features can be run all year long, with the freezing temperatures of winter creating a unique and dramatic visual of ice and rock."

Waterfalls aren't just about visual beauty, either - they have an aural component. "The sound and noise level of the water itself is often overlooked when designing a water feature," Gustafson says. "The sounds emanating from a water feature can vary from a soothing trickle to a deafening roar that can enhance and create drama or overshadow the desired effect."

That's why the most essential step when designing and fabricating a water feature is meeting with the client to establish clear-cut design ideas and budgets, Gustafson says. "The key to any successful project is planning."

Too often, homeowners will point to the corner of the backyard and say they want the waterfall there, says Jim Jenkins of Synthetic Rock Solutions in Sheridan, Ore. He remembers one client who thought that a waterfall should be installed in the back corner of his property because when he sat on his deck, that was the part of the yard he saw. However, Jenkins soon learned, the client rarely sat on his back deck. Instead, the installer put the waterfall at a spot in the yard where it could be seen from the man's favorite chair inside the house, where he spent more time.

In general, the waterscape should be situated in the yard so it can easily be viewed through a window, especially from the most-used room in the house, Jenkins says. "The idea is to bring the landscape into your home via the window."

Digging in
Gustafson's company uses conceptual drawings, 3-D computer and scale models, and engineering expertise to envision a project and predict problems before breaking ground. "Once the plans are in place, fabrication and construction can begin. This usually takes place on multiple fronts simultaneously. Excavation can begin while pumping systems are created and water-feature substructures are prefabricated and constructed on site."

Installation of the pumping system is next. "The water system is the heart of any feature and can make or break it," says Gustafson. "Having a pumping system that exceeds the hydraulic requirements is imperative. This allows for a full range of adjustment in flow rates to achieve the desired aesthetics and style of a waterfall."

Mike Fedele, plant manager at Rock & Waterscape of Auburn Hills, Mich., uses steel to design the waterfall structure. He adds what he calls secondary steel to form the shape of the rocks. His team uses shotcrete on the steel structure, he explains. "When it starts to harden, we shape it and detail it until it looks like a rock formation."

The shotcrete is usually applied in two layers, with waterproofing tackled between the first and the second layer. "After the final coat, there is an optional crystalline waterproofing that is actually mixed into the concrete," he says.

Cohen uses a rubber liner for waterproofing. "The way we construct waterfalls is to set a rough structure when we do our gunite work, which we step like shelves," he says. "We go back over that with a rubberized liner and then build our rock work." The rock work isn't cemented together but held together with expansion foam, which Cohen says adds another layer of waterproofing. "By using a liner underneath the feature, we guarantee there won't be leaks later on. The liners are flexible. As concrete shrinks and expands, many waterproofing materials can fail, but the liners are good for a minimum of 15 to 20 years."

David Schwartz of Rockmolds.com, based in Maui, recently completed a waterfall and pool that was to look like a natural pond. His first step was to use Hydrostop, which he says takes the place of plaster and works as a waterproofing method. Diamond lath was used to form the boulders.

Schwartz considers knocking on a faux rock and hearing the echo a pet peeve, and he prefers to make his boulders more realistic. "We don't like hollow boulders - we like them to be solid," Schwartz says. "We fill the diamond lath with regular concrete mix and fill the boulders."

Once that is cured, the lath is covered and a texture coat is applied. Schwartz does not stamp the concrete, but hand-trowels it to develop a subtle texture.

Coloring is the biggest challenge when trying to match concrete boulders to natural surroundings. Steve Kroo of Concrete Jungle, in Northridge, Calif., says that in general, coloring is easy if done the right way. "You do have to know some basics before you color," he says. "You start with a base. You can use an acid stain and learn techniques to make rocks look natural." Jenkins agrees that staining is the way to go. "If you paint a rock, it looks painted." Paint also adds another layer to the concrete when what you want is for color to penetrate, he notes.

Certain waterfalls will be designed with spillway features. Typical spillways don't recirculate the water - instead, water flows at a constant rate from a reservoir, says Fedele. "Design is done essentially the same way. A retaining wall may be poured first, then waterproofing, and then comes forming the rock with shotcrete." Very little maintenance is required for waterfalls once installed. "If you have the waterfall under trees, you're going to have to keep it well cleaned of leaves," says Billy Sanders of Decorative Concrete Coatings, in Monroe, La. "That's pretty much common sense."

Water can also calcify on the concrete and may need to be scrubbed off. Schwartz uses a bristle brush to scrape off calcium from the stone. Kroo recommends pressure-washing the rock every month or two to clean off the dirt and minerals.

"Every so often things might come loose, and areas may need to be touched up," Kroo adds, "but that's a fairly easy fix." 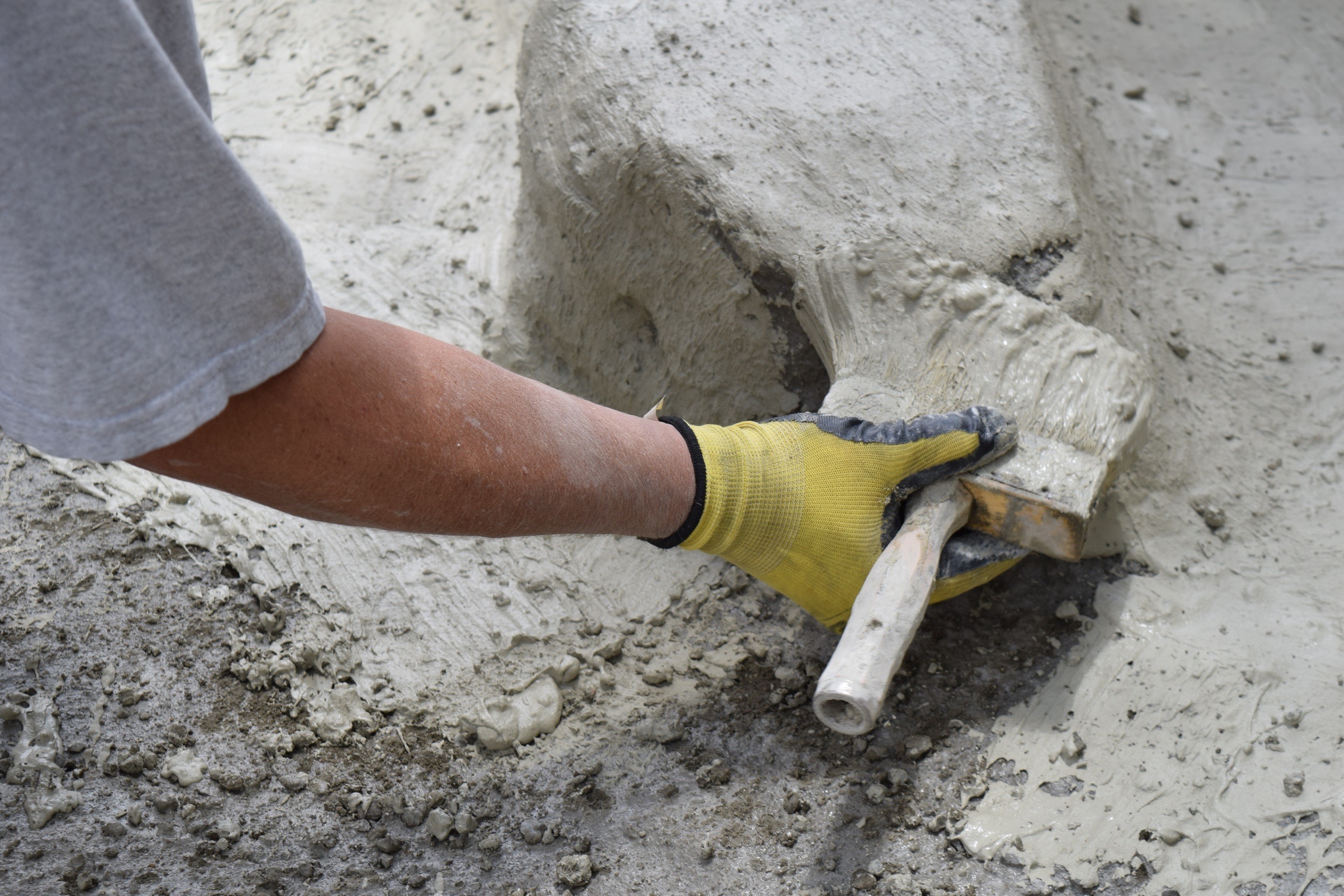 Waterproofing may be the least sexy phase of construction, but it’s one of the most crucial. While there really isn’t any artistry involved, it’s easy to overlook the importance and just go through the motions. 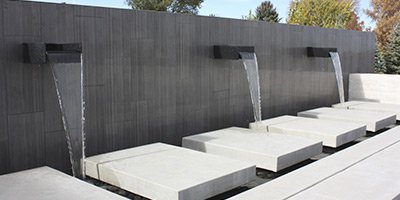 The beauty of decorative concrete comes from its versatility and stunning final results. Each project’s unique traits help sell the next project. However, your future potential clients don’t necessarily have access to your past projects, which is why photography is a crucial component of your marketing plan — regardless of your company’s size. 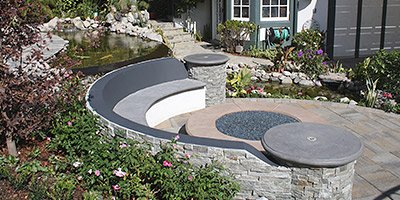 In Los Angeles, and in particular the Beverly Hills area of the city, there are many OMG backyards. This one, though, created by Scott Cohen’s company, Green Scene Landscaping & Swimming Pools, was over-the-top enough to have been featured last summer on the television show “OMG Backyards.”