This summer, Tucson will inaugurate Sun Link, a $196 million electric streetcar line. The City of Tucson and Pima County’s Percent for Arts Program provided for artwork at the route’s 22 stops.

The call for proposals inspired Phoenix artist Mary Lucking to create a design for a stop in a neighborhood she loved. “I lived in Tucson for quite a few years and spent a lot of time on Fourth Avenue,” Lucking says. “I decided to apply with Pete Goldlust, my old studiomate from grad school. We love doing transit projects, and we love doing work in Tucson.”

The stop on Fourth Avenue between Sixth and Seventh streets serves a vibrant neighborhood of students and hippies, says Lucking. “It’s a place where people actually walk around. There are clubs and restaurants and secondhand stores and food co-ops. It’s very vibrant and very fun.”

Neighborhood merchants had requested a design that wouldn’t block the view of their storefronts. So, instead of creating vertical structures, Lucking and Goldlust decided to concentrate on decorating the 45-foot-by-8-foot concrete platform and the chairs and partitions that would have to be at the station anyway. 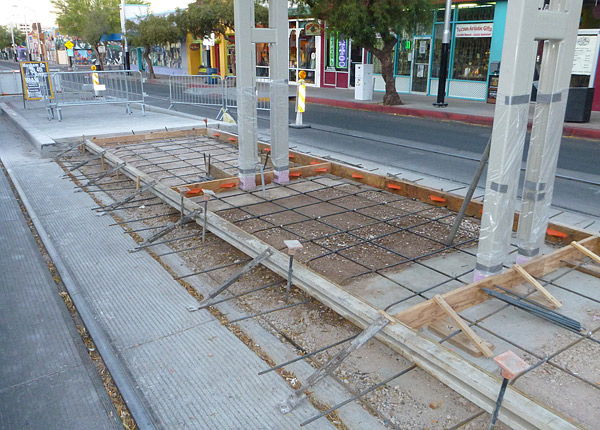 Psychedelic cactuses
The pair conceived a lively design of swirling cactus shapes. “The imagery was kind of inspired by the playfulness of the site,” Lucking says. “It’s like psychedelic cactuses, which is what Fourth Avenue is like.” They decided Lucking would execute the design in a mosaic on the pavement, and Goldlust would render it as cutouts in the station’s steel benches and partitions.

To turn the mosaic into reality, Lucking contacted Progressive Hardscapes, the Phoenix office of Denver-based decorative concrete contractor Colorado Hardscapes Inc. “Mary applied for the grant, and we were a subcontractor to Mary,” says Progressive manager Mike Riggs. “She had it together not only from an artist’s standpoint but also for submittals and construction. She was right on top of it.”

Although Lucking had never used the LithoMosaic technique, she was drawn to it. “It gave us an opportunity to add color in a way that wouldn’t fade in the desert sun, the way a lot of colorful materials do,” she says. 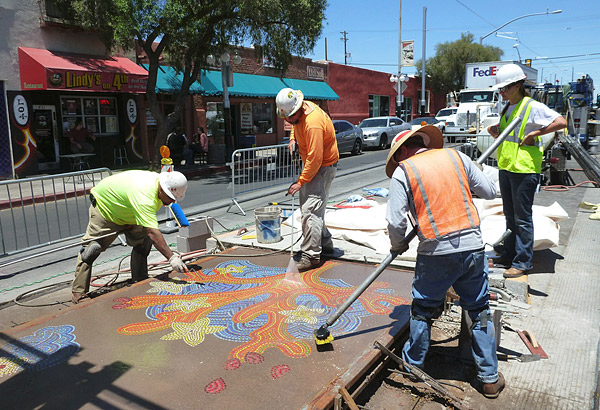 Progressive Hardscapes had never worked with LithoMosaic either. In fact, says Riggs, the streetcar station was the first LithoMosaic project in Arizona.

To be licensed to use the LithoMosaic technique, Progressive Hardscapes staff spent time with its developers, Ron Shaw, of California concrete contractor Shaw & Sons, and Robin Brailsford, a mosaic artist who pioneered the technique.

“During the training that is required to become a licensed LithoMosaic installer we toured multiple projects that were done in Southern California,” Riggs says. “Then we went to Shaw & Sons’ facility, where they showed us how the patented process is done, and we did some hands-on training.”

In the LithoMosaic process, the artist glues tiles facedown on plastic mesh. After the tiles are embedded in wet concrete, the mesh is stripped away. 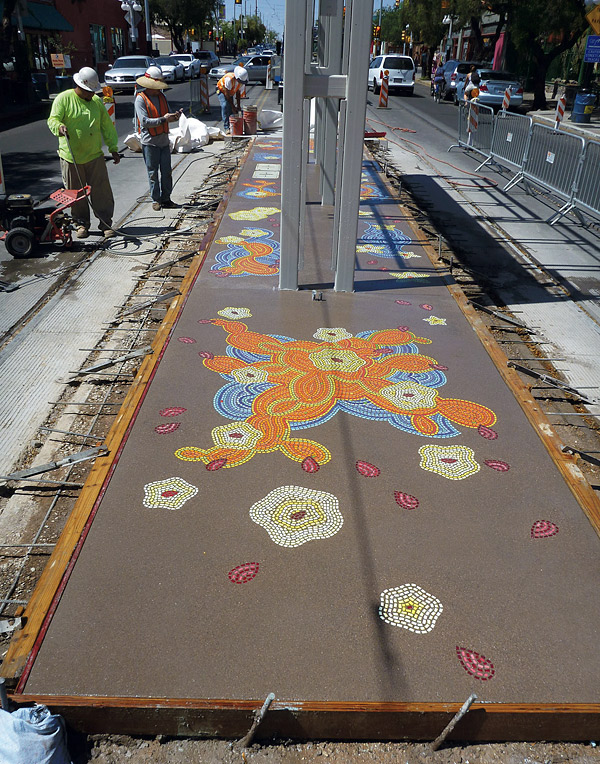 LithoMosaic is part of Shaw & Sons’ Lithocrete system, a suite of materials and methods for creating decorative concrete surfaces. Among the materials are mix additives that control alkali-silica reaction (ASR), enabling artists to use glass tiles or glass aggregate without fear of their popping out later. Lithocrete licensees also use a proprietary sealer that provides further insurance against ASR problems.

“Ahead of time, we spent quite a bit of time with Mary looking at overall designs and talking about how the system was going to go together,” Riggs says. Lucking originally envisioned a design that would incorporate both LithoMosaic and the Lithocrete System 1 exposed-aggregate technique, but the budget wouldn’t accommodate that.

Once LithoMosaic was chosen, Progressive Hardscapes made 1-foot-by-1-foot mockups of the design and then a 4-foot-by-4-foot mock-up so Lucking could see how her color scheme looked.

“Once we had our means and methods dialed in and the colors just the way she wanted them, we were ready to proceed with the project,” Riggs says.

Lucking discovered she could get smalti — brightly colored square glass tiles — right in Tucson from di Mosaico, which distributes smalti from Italian manufacturer Mosaici Donà Murano. Her design included more than 20,000 tiles, and she spent hundreds of hours gluing them onto 2 1/2-by-8-foot mesh sheets.

When the design was complete, Lucking rolled the sheets up with bubble wrap, put them in Sonotube sections for protection, and brought them to Progressive Hardscapes.

Progressive Hardscapes staff completed their part of the job in three days in June 2013. On day one, they placed #3 rebar on 18-inch centers and doweled the joints. Concrete was placed and finished on days two and three. Progressive Hardscapes staff laid out the mosaic mesh on templates, then laid it on the concrete, troweled it in, and stripped off the mesh. Control joints were saw-cut right through the mosaic. “With the bright colors, you don’t really notice a standard saw cut running through the pattern,” Riggs says.

A bit of Davis Colors’ Mesquite pigment was added to the concrete “just to take off the gray,” Riggs says, as well as to match the exposed aggregate finish used on some other Sun Link stations.

LithoMosaic made the project easier not only for the artist, but also for Progressive Hardscapes. “The artist can do that time-consuming work in a nice air-conditioned environment, and then we can install the mosaic quickly on-site,” Riggs says. “From a safety and traffic control standpoint, we can get in and out of there a lot quicker.”

The project’s $73,000 budget covered materials and labor for the mosaic and the time Lucking and Goldlust spent designing and managing the project. The general contractor covered the costs of Goldlust’s cutouts as part of the fabrication of the steel furniture.

“I was thrilled with both the process and the result,” Lucking says. “I like the freedom of form that the technique gave me, putting a handmade feel into a contractor-fabricated project.”

Most challenging aspect: An artist and a decorative concrete contractor teamed up for their first project using the LithoMosaic process. 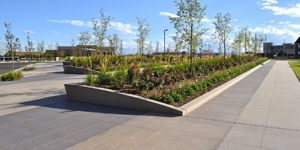 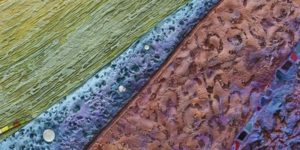