Originally called Chattahoochee stone because the smooth rock was dredged out of that river, Epoxy Stone from McKinnon Materials in Tampa, Florida, is a wonder worker. The coating system, available in 16 colors, is also known as river rock and pebble epoxy.

Aesthetically, it resembles exposed aggregate without the cement in between the rocks. On the practical side, it can cover up unsightly but stable concrete surfaces and effortlessly hide defects. “If you put a layer of our Epoxy Stone over cratered concrete, it’ll look nice and smooth,” says Glenn “Buster” Osteen, technical director.

Looks aside, it possesses a flexural rating twice that of concrete, he says. And as for bonding, a concrete surface will fail before the system’s bonding epoxy gives out.

“When you mix epoxy with river gravel that material has three times the psi strength of concrete,” Osteen maintains. “A 1/2 inch of river rock (with epoxy) is like 1 1/2 inches of concrete.”

Originated in 1960 by Gordon McKinnon, father of Ken McKinnon, the company’s current president, Epoxy Stone makes a great floor for both interior and exterior applications. On the inside, it’s a great choice for basements, laundry rooms and sunrooms.

Outside, you can use it to cover pool decks, patios, outdoor showers, porches, entryways and driveways. The list goes on, including it works well with radiant floor systems.

“It makes a porous surface and is a really good choice for decks around swimming pools,” Osteen says. “The water enters and flows throughout the stone surface and never builds up puddles.”

In colder climes, he notes, “Freeze/thaw cycles won’t make it pop off when you install the product properly.” The flooring will let water pass through and follow the structure’s runoff pattern.

After prepping, combine 150 pounds of rock (three bags) to one gallon of epoxy in a tumbler-style mixer. “This mixture will cover between 35 and 40 square feet,” Osteen says. Transport the mixture in a wheelbarrow and dump it where you want it. Next, spread it with a gauge spreader or rake.

“Then trowel it in with a trowel,” Osteen says. “The epoxy is its own sealer. But some people like to put another coat of epoxy on the next day when they remove the forms.”

Most contractors install the product over concrete, both new and existing.

Ryan Stowell, owner/operator of Advanced Epoxy in Wichita, Kansas, has used McKinnon’s Epoxy Stone for roughly 12 years now. “For the first five years, it’s the only thing I installed,” he says, before expanding into other flooring treatments. “I’ve been with Buster from day one.”

Stowell, a father of five who runs the business with his wife, says he could never find the time to attend training offered by McKinnon Materials. Consequently, Osteen coached him over the phone. “And we’ve done well,” he says. To this day when he encounters an issue, he’ll reach out to Osteen. “And he always knows the answer and method.”

Stowell says most of his customers with very old pool decks choose this product for him to install. “A lot of the old decks are unlevel with breaks in the decking,” he says. “We cover up the cracks and the stone holds up very well.”

Osteen recommends treating the cracks with an epoxy-modified solution. “If there’s movement in the concrete and that crack exhibits stress, you need to fix it.” This is especially true if the crack is away from an expansion joint,” he says. “That joint is probably not working as intended.”

So far this year, Stowell has installed three pool decks, one multicolored to match the walls and create color-coded areas. “One was for eating. Another for where they lounged. And another where they laid on towels,” he says. He’s also installed the river rock in a very memorable man cave in Oklahoma.

One of Epoxy Stone’s biggest selling points is that when it rains or the kiddos splash, the water transfers through the stone and drains away. “There’s always a drier sense on top of the pool deck,” he says.

He recalls resurfacing a patio where water backed up to the house when it rained because the concrete had settled. “Their table and chairs leaned toward the house,” Stowell says. But a layer of Epoxy Stone made a level surface for the homeowners.

“And now when it rains, the water puddles under the Epoxy Stone so they don’t step in it anymore. It can’t convert the grade or fix the issue but it can get you up and out of it.”

The surface voids also provide traction so you don’t slip and slide, he adds. Whereas walking on stones can hurt your feet, “An Epoxy Stone surface is very comfortable to walk on,” Stowell says. “So long as you give the surface a good trowel down.”

What about UV rays. Do they not break down the epoxy?

While UV does have a discoloring effect on most epoxies, McKinnon Materials UV Epoxy and Cold Weather Epoxy are both UV stabilized and modified to withstand UV exposure longer than normal epoxy with fewer negative effects.

Epoxies are also a cost-effective coating for flooring. Polyureas, polyurethanes and polyaspartics will deliver UV resistance and a more durable finish, but they are more expensive. 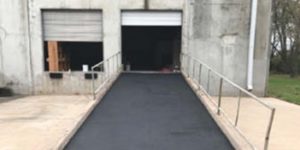 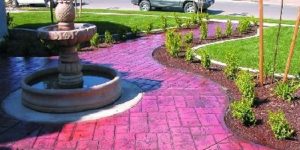