Nothing about the Solyndra Inc. project in Fremont, Calif., was easy or ordinary. And that’s putting it mildly.

Solyndra broke ground for its second solar panel manufacturing plant, Fab 2, on Sept. 4, 2009, with a target completion date of July 15, 2010. The new, highly automated, environmentally friendly 609,000-square-foot facility, which offers a clean-energy alternative to oil, will produce up to 500 megawatts per year. The plant will enable the company to fulfill a contractual backlog of more than $2 billion and create about 1,000 new jobs.

To accommodate the manufacturing robots that do the bulk of the work, the floors of Solyndra’s two plants must be very flat, level and durable, says Jonathan Williams, president of Diacon Inc., in Manteca, Calif. “We couldn’t have any ridges or valleys that would cause them (the robots) to offshoot.” The task at hand was to produce functional factory floors that were also pleasing to the human eye.

Another floor came first
Diacon first came on board with Solyndra when C&L Coatings Inc. of Bakersfield hired it and Contract Installations of Sacramento to expose the concrete in an existing building right around the corner from Fab 2. Both subcontractors had modified Bobcat T250 concrete grinders that could turn over a large amount of square footage in less time than conventional grinders.

From December 2009 until March 2010, the two companies prepped the 200,000-square-foot floor for a RetroPlate install. (RetroPlate materials are manufactured by Advanced Floor Products.) The refurbished area would be where Solyndra employees assemble, package and ship products.

What made this part of the project more complex, Williams says, was they had to break through a very hard topcoat of Stonhard ATK epoxy to expose a very soft mortar bed.

“The first few days were nerveracking,” says Robert Defraia, Diacon’s chief financial officer. “We had to continually mock up new scenarios that required us to lean on every piece of inventory we had.”

Every time they thought they had it nailed down, he says, a new section of the floor would prove to need new tooling or a different combination of tooling.

“We had to use a soft-bonded diamond to cut through the epoxy,” Defraia says. “Once we got to the mortar bed, we were at the opposite side of the spectrum, needing a hard-bonded diamond. If we didn’t adapt the diamonds right, we would have gone through a set of 36 every 5 to 10 feet.”

The crews constantly adjusted the diamonds to “what the floors were doing,” Williams says, and were able to turn over the floor at a 30-grit resin level without having scarred the concrete.

“C&L Coatings took the floor from this point,” he continues, “polishing with their modified polishing machines to produce a beautiful RetroPlate floor that the owner will enjoy for years to come.”

Fab 2 and fabulous results After this was completed, Diacon was hired as the prime polishing contractor for Fab 2, installing a RetroPlate floor, stopping at a level 1 finish that Williams says has a shine equivalent to a level 2. Work on the 270,000-square-foot floor began in mid-April and continued into early July. This time, Contract Installations and C&L Coatings were part of Diacon’s team. Two crews of eight worked 16 hours a day, seven days a week, to complete the job.

With their modified Bobcats, Diacon and Contract Installations were able to produce 7,000 square feet of finished polished concrete per day, assisting in meeting the fast-tracked, brutal schedule of Redwood, Calif., general contractor Rudolph and Sletten, as well as that of the owner.

“This floor had its own complexities due to the method used to pour the concrete,” Williams says. According to plan, the floor area was divided into quadrants and subdivided into 600- foot-long, 10-foot-6-inch-wide strips. The strips were filled with concrete in an alternating pattern — pour, gap, pour — at the rate of four to six strips a day. The infill rows were poured 10 days later, making for cold joints on three sides of each strip and creating the potential for unevenness. Rows had saw-cut joints every 10 feet.

“The concrete company (that poured the concrete) was trying to achieve an ff/fl (floor flatness/floor levelness of) 40 or better — which they did, but at the cost of poor edges,” Williams says. When the finishers ran the edge trowel down a joint, it was wet on one side and dry on the other. “This caused a lot of bouncing and created a lot of highs and lows on the edges.”

This, in turn, caused a major glitch in the polishing portion of the project — worse than the diamond dilemma — involving unsightly white spots. Williams estimates that 90 percent of the discoloring was caused by the bouncing trowel and the remaining 10 percent by some type of moisture variation. “Stego Wrap was used as a vapor barrier,” he says, “but there is some concern that when the stakes were placed for the forming they may have punctured it.”

Adrian Henry, Diacon’s vice president of operations, says that when going into the project they noticed the whitened areas surrounding the construction joints, about 4 to 6 inches on each side. The crew used a 32-inch walk-behind to address any crowning issues that may have happened during the curing process, then continued to polish with the Bobcat. “Once we polished up to a 400 grit, these areas became more profound,” Henry says. “We addressed this with the owner and general contractor but they didn’t want to hear about any issue. They just wanted us to fix it.”

So Diacon tried a number of things, which included using a 50-grit metalbond diamond, first on the 32-inch walkbehind and then on the edger. “Once we found the right tool for the application, we changed the process a little and got good results,” he says. They followed this procedure with a 40-grit metal diamond down the center of the joint, overlapping the work the edger had previously done.

They tried torching the area to get the moisture out, grinding deeper and using an efflorescence remover, a gray dye and guard darkening.

Finally, they applied a Smith Paints antique gray water-based stain to an area that had some cream showing. “It darkened it up and the color matched the floor,” Henry says. “The blend was almost perfect.”

They let the stain dry and then applied three coats of AFP’s RetroGuard, burnishing between each coat with a high-speed burnisher using an 800-grit diamond-impregnated pad. Eureka. They had found it.

“Solyndra was happy with the results,” Henry says, “but it took a lot of thinking outside the box. It certainly wasn’t your typical way of doing polished concrete.”

A visit from Obama
President Obama and California Gov. Arnold Schwarzenegger visited Solyndra Fab 2 on May 26. In preparation for this visit, the Diacon team was asked to finish an area of the floor ahead of schedule so the stage and seating could be placed.

“That really threw a monkey wrench into the scenario,” says Jonathan Williams, president of Diacon Inc., adding that the Secret Service showed up May 22 and began setting up security. “We were the last crew there, cleaning the floor until about 2:30 in the morning. The president gave his speech about 10 a.m. but we weren’t allowed to attend. By 1 p.m. our crew was back in there and going again. We were grinding while they were disassembling the stage around us.”

During the presidential visit, Williams says, Diacon and Contract Installations’ Bobcats served a federal purpose of their own: They were placed as barriers at the main entry. 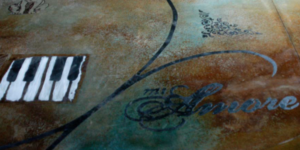