I still vividly remember my first large polished concrete job. Back in 2000, the equipment we used was somewhere between a Rube Goldberg design, a homemade go-cart and equipment adapted from the stone restoration and floor-cleaning industries. Manufacturers were just starting to visualize equipment solely for the polished concrete industry.

If you want to visualize the difference between the equipment today and then, you need go no further than comparing a Ford Model T to a Lexus RX Hybrid. It’s time to reminisce, not just for the sake of reminiscing, but to understand both how far we’ve come and how far we still have to go.

Let’s set the ground rules: Polished concrete is defined here as the combination of diamond grinding and polishing in conjunction with applying densifier/hardeners, with or without color.

No one denies that, intentionally or inadvertently, concrete was ground and polished prior to the late 1990s. But it was not carried out as a separate industry as it is today. For example, RetroPlate’s first formulations were in late 1997 or early 1998, but by the time labels were designed it was 1999 — hence the registered name “RetroPlate 99.”

Polishing concrete has progressed from an industrial application focused on repairing dusting and spalling concrete to an industry that is not only function-oriented but also design- and sustainability-oriented. We’ve gone from a time of adapting equipment from other industries to having nearly 20 legitimate equipment manufacturers, and from starting with sodium-based densifiers to having sodium, potassium and lithium-based options — some as silicates, some as siliconates and some as blends. Diamond technology is progressing so quickly that it is almost impossible to keep up with names and technologies. With dyes for polished concrete joining integral colors, dry shake hardeners and acid stains, we’re not just plain vanilla any more, but can provide a rainbow of colors that rival Mother Nature.

Evolution
How has the industry changed in the past 10 years?

Polishing concrete, not unlike other new industries, begged, borrowed and stole from others in its infancy. Equipment came from the surface prep, stone restoration and cleaning industries, and as one can imagine, nothing was a perfect fit. The size of the equipment was not adequate, the head speed and head pressures were not optimum, diamonds wore out too fast or glazed over, and one had no real choice of “wet or dry.” The hurdles never seemed insurmountable because we weren’t smart enough to know better. My first polishing project was a 100-square-foot test area in my own warehouse, carried out with a 17-inch swing machine from my stone restoration business, using marble diamonds. On my second project, fixing a dry-shake floor with dirt and footprints, I saw no reason to change my equipment. After all, we were only talking a few thousand square feet. Well, we did such a great job that the general contractor initiated a change order for the rest of the project, an additional 100,000-plus square feet of a new prison. As you can imagine, one 17-inch swing machine wasn’t going to cut it, so we bought new equipment to do the job right: another 17-inch CCG swing machine, a 10-inch CCG for under the prison bunks that were bolted on the wall of the cells, two Alto 28-inch walk-behind scrubbers, and a used 50-inch Advance ride-on. Each piece of equipment was then outfitted with custom plates and diamonds. We thought that the several months it took to complete the job was pretty impressive! How naive. Creativity was a necessity — in fact, it wasn’t unusual for operators of swing machines to get better head pressure by placing sand bags on the machine, or better yet, to have their wife sit on the motor. You did what you had to. Nothing is the same today as it was yesterday. There is a complete industry today that did not exist in the late ’90s.

VIC International first brought the HTC grinders over from Sweden in 1993 for surface preparation, with SASE Equipment following with the Diamatic in 1997. Not until 1999 or 2000 were the equipment and chemical manufacturers working toward creation of the polished concrete industry as it stands today. While these machines had the ability to produce level floors, they did not have the ability to float with the floor and polish only the surface cream, unless the floor had been initially finished flat. With a wavy floor, you had either the choice of fully flattening the floor to produce a uniform appearance, or simply taking off the high spots, leaving a very mottled, irregular appearance. With stone-industry equipment, not only was your cutting path narrower, but the equipment was much slower and had less head pressure. Yet, if the customer did not require a totally flat floor for performance requirements, the swing machines, such as VMC’s CCG lines, could “ride the waves” and produce a beautifully polished cream. The ride-on and walk-behind equipment was well suited for polishing, along with cleaning the floors or working the densifier, but not grinding. It must be noted that although industrial vacuums did exist in the early days, they were inefficient, so that most early work was performed wet. Today you not only have surface-preparation companies providing grinders and polishers, but also established stone industry companies.

Diamond evolution has not slowed from the early days. In fact, during the past several years, diamond technology has leapfrogged equipment advancements. Not only have the matrices that hold the diamonds been improved specifically for concrete grinding and polishing, but so have the diamonds. Today you have diamonds for wet, diamonds for dry, diamonds that can be used wet or dry. In addition, you have “pad-based” diamonds that are intended to provide a more effective and efficient polishing process, either at the end of the densifying process or simply as an ongoing maintenance process. The Twister pad from HTC was the first product in this category when introduced two years ago, and several additional products with a different approach exist today, such as Concrete Polishing Solutions polishing pads and the Innovatech I-Shine Polish System. These products are generally attached to a high-speed burnisher and not only produce high production rates, but also follow every contour of the floor, flat or wavy. Most of the equipment manufacturers, in an attempt to provide their customers with the ability to polish wavy floors without grinding them flat, have developed diamond-plate holders with springs or couplings to better follow the floor contour. If your floor does have highs and lows, and your equipment is not capable of floating, you risk creating very deep scratches in the valley walls.

The “juice,” as densifier is called, evolved from the earlier densifiers that were created in the mid-1950s to help eliminate the natural dusting that occurred within concrete. Through formula changes based on percentage of solids, wetting agents and proprietary adjustments, the chemical base for polished concrete was created. Each manufacturer has what they believe to be their own strengths that set them apart. Today’s best-known densifiers are either sodium, potassium or lithium-based, though new chemistries utilizing amorphous or colloidal silica are entering the market.

The polished concrete industry, though 10 years old, is still in its infancy. New opportunities for its uses arise daily. Three years ago, “sustainability” was just entering our conversations, and now it presents us with our largest growth opportunity. It is not as simple as specifying “polished concrete,” as even within our group we do not agree what constitutes the process and look. We need to open our eyes and ears as to what the customer wants, not what we think they need. For all of us to take full advantage of these new opportunities, our industry needs to come together, just as the carpet and hard surface industries have, and each individual has to be open to learning opportunities, both within and without our industry. Good luck in the second decade. 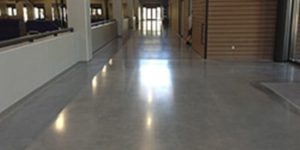 Retroplate: Moving from Experience to Technology in Polished Concrete 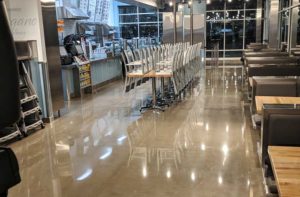 Polished Concrete Maintenance is a Must to Ensure a Long Life 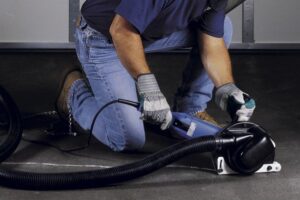