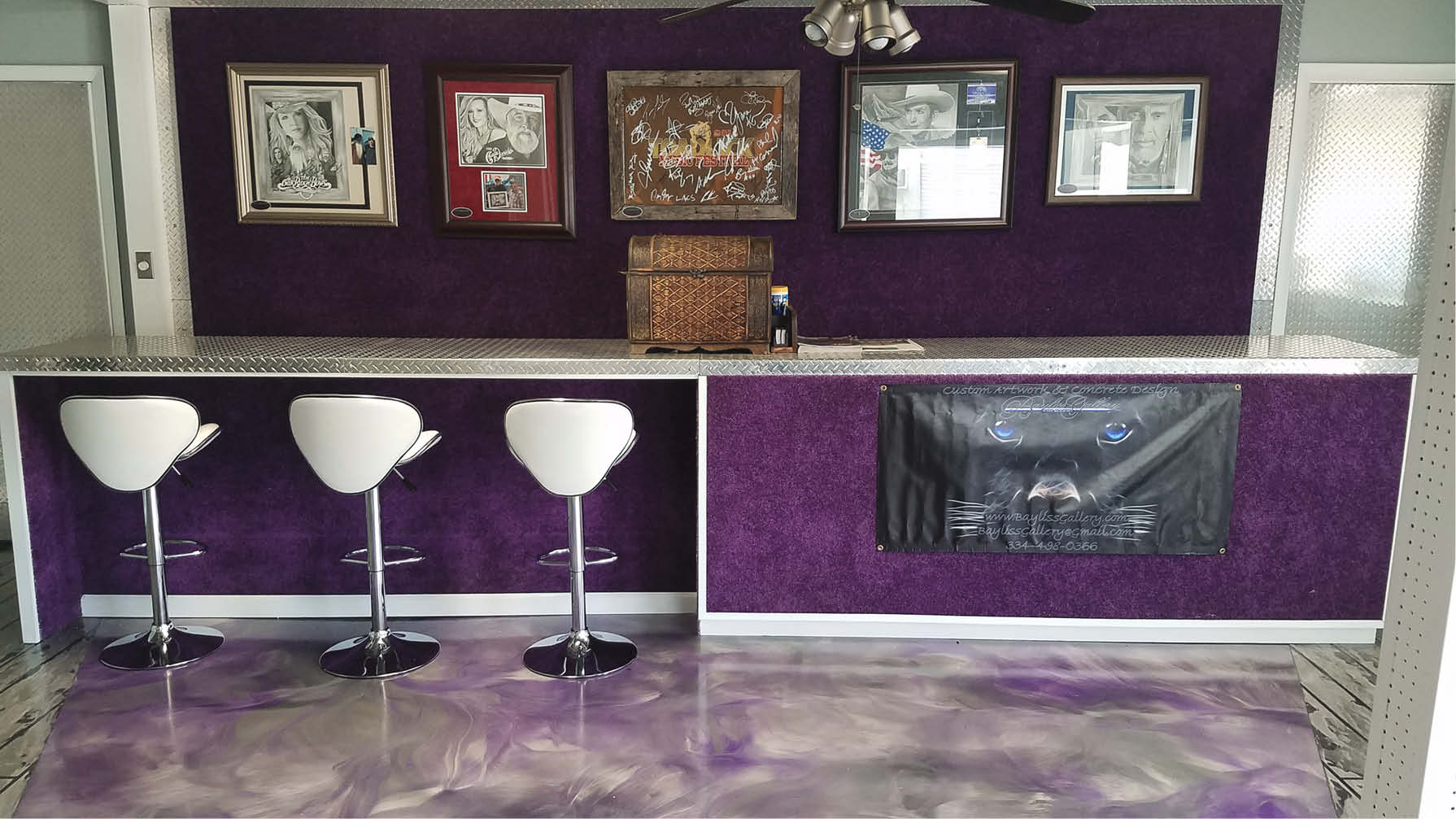 You might say Jeremy Bayliss, owner of DelRailey Designs in Dothan, Alabama, is a colorful man. Literally. Out of all the decorative concrete services he offers to customers, he says, “Color sets me apart from everything else.”

He often blends powders to make custom colors and doesn’t like to constrict his colors to just those found on charts. “I throw colors down and I know what colors I can make with what,” he says. “That’s the artist in me.”

A jack of many trades
Bayliss, 38, who grew up in Wisconsin and Minnesota, was stationed at Fort Rucker in Alabama in the 2000s during his enlistment with the U.S. Army. In 2008, he was medically retired due to injuries from a motorcycle accident that left him 90 percent disabled. He decided to stay in the area. 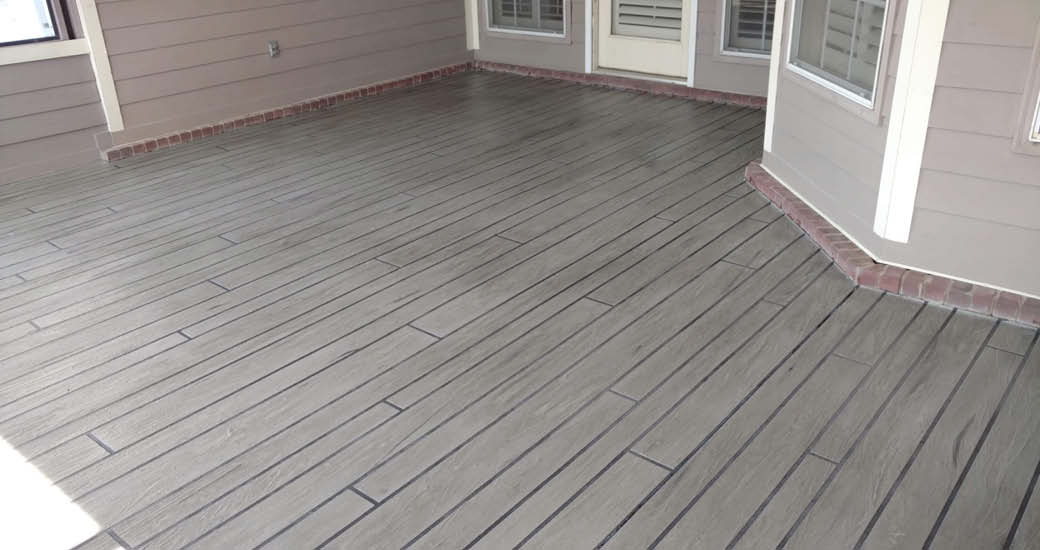 Even before he was discharged from the service, he was a professional painter doing residential and commercial jobs through his company, A Touch of Paint. Along with his painting gigs and mural commissions, he began to dabble in concrete coatings. Before long, the decorative concrete side of the business took off.

By 2009, he had founded DelRailey Designs, a company that offers decorative concrete services that includes everything from concrete hardwood imitations and colorful metallic epoxy floors to hand-drawn rock patterns and air-brushed murals. “Concrete is a huge part of my business,” he says, “but it is just a part.” 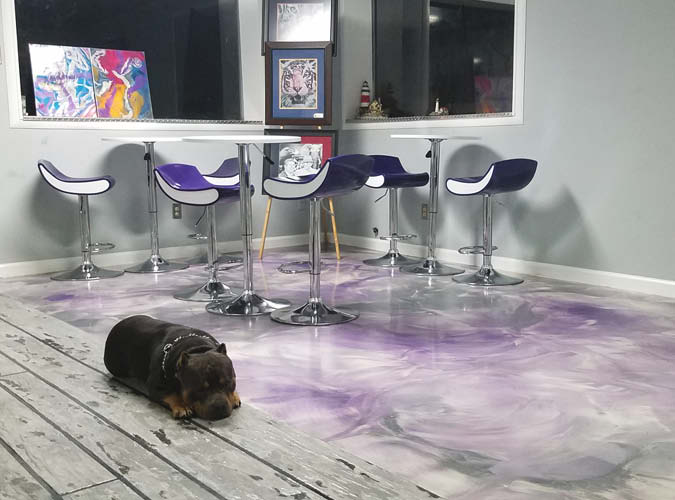 He usually has four or five employees working for him, depending on the workload. Normally, he subcontracts the pouring portion of his jobs and concentrates on doing the decorative design. “Most of the time, my customers don’t even pick colors. They hire us because of my artist abilities,” he says. “We put it all together.” 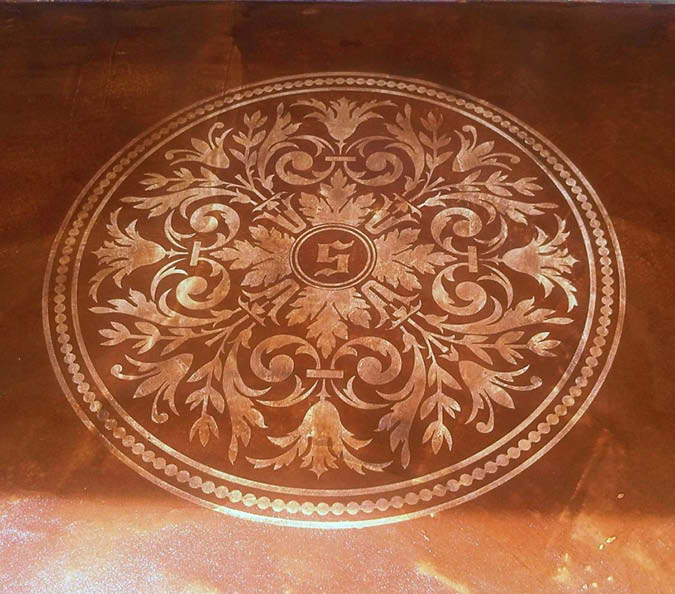 In addition to doing concrete floors, he’s often hired to pair them with a mural on the wall. That’s another thing, he says, that makes him different from other concrete contractors in the area. “I have a background in art and I pull from that background in everything we do.”

Busted to Beautiful
DelRailey Designs — which Bayliss says was named after his young teenagers, Skyler del Rae and Dylan Riley — mainly uses Elite Crete products for its decorative work. That company’s Reflector Enhancer system, with the way Bayliss manipulates the color, is well received in the area, Bayliss says.

While the metallic look is very popular, stamped overlays are far and few between. “It’s a hard market in southern Alabama near a military base,” he notes. “There’s not big money here like there is in big cities. So I had to come up with other ways (to decorate concrete) that people around here could afford.” 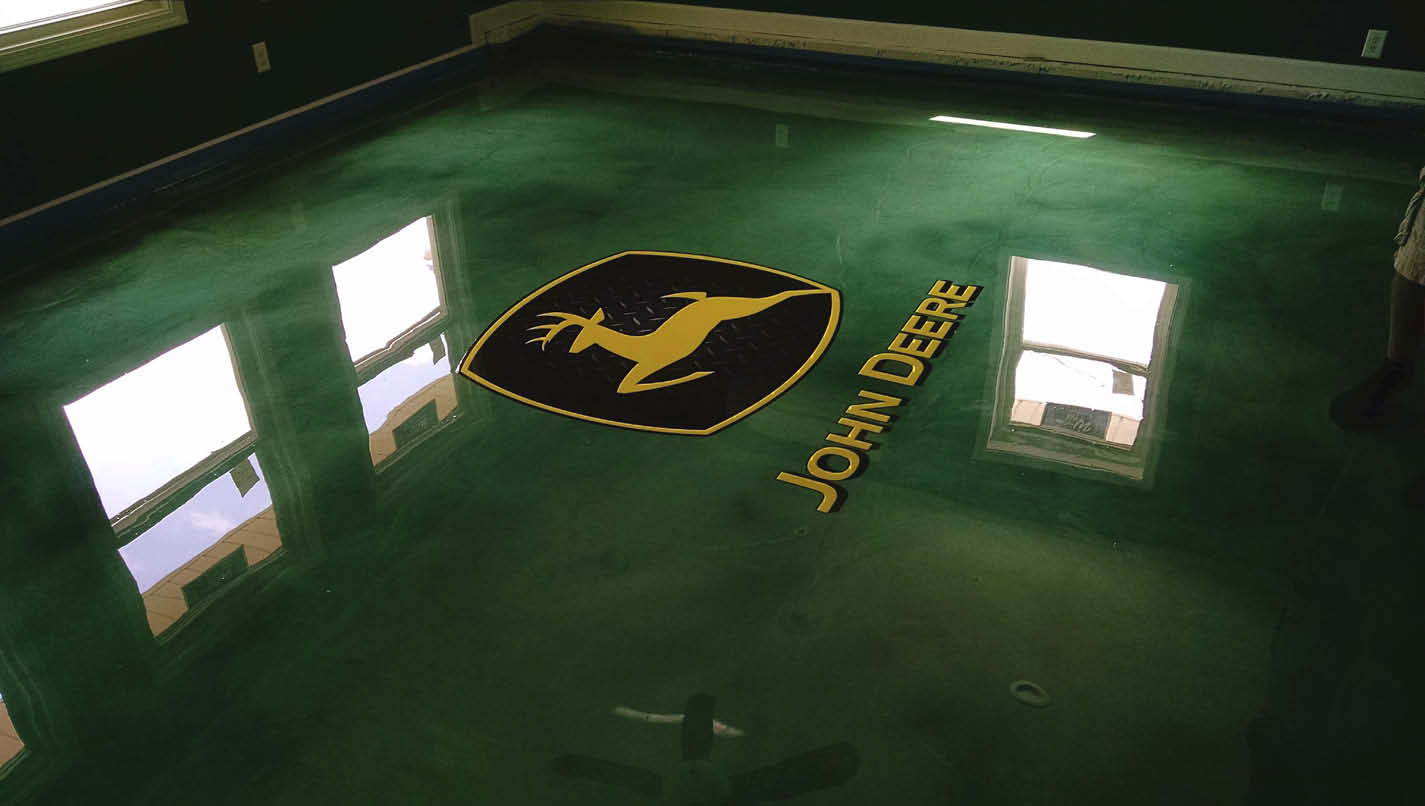 One of those ways entails freehand-drawn stone or wood patterns on existing cracked slabs that are overlaid with Elite Crete’s Thin Finish. “It’s allowed me to do more as far as looks go for less cost and with less product,” Bayliss says about the overlay that can breathe new life into old concrete. Plus, he adds, customers like the fact they have something unique that can’t be exactly duplicated.

Basically, he transforms an unsightly cracked patio or driveway by resurfacing, cutting and carving. He’s contemplating offering training on this method, which he calls Busted to Beautiful, as well as sharing his coloring techniques. He says Elite Crete is on board with this idea and he’s working on a plan to bring It to fruition. 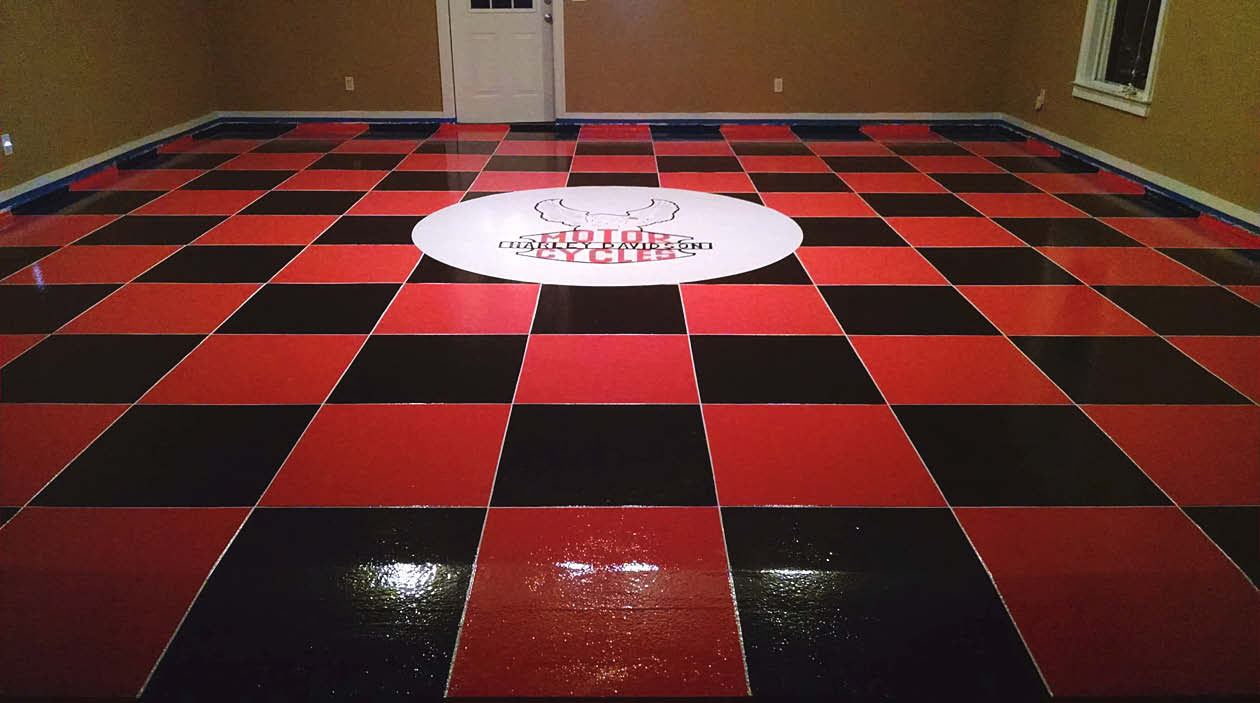 For the dogs
Bayliss and his partner, Julian Ammons, who runs Lower Alabama Bully Cartel, an organization devoted to breeders of American Bully dogs, recently opened their combined headquarters in Hartford, Alabama. A bully named Loso (below) is Bayliss’ service dog and is alongside him when he goes out on jobs.

Bayliss also breeds, shows and trains the dogs — a mix of the American Pit Bull Terrier, the American Staffordshire Terrier and several bulldog-type breeds. Lovers not fighters, bullies are bred to be family companion dogs, he says.

The new headquarters, which includes a dog pool, features a showroom floored with concrete hardwood planks and Reflector Enhancer metallic epoxy. It also is walled with a variety of Bayliss’s artwork including murals.

Sage advice
Bayliss has a bit of advice for those just breaking into the decorative concrete business. “Always be open and honest with your customers and never cut corners,” he says. “It’s just not worth it in the long run.” 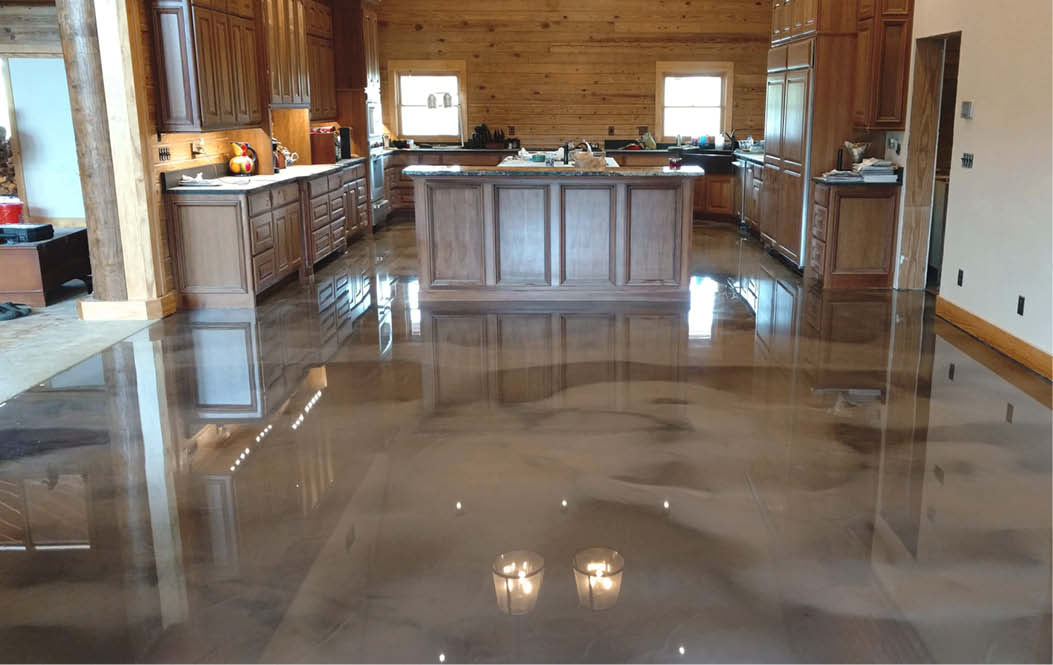 He says he likes to look at his work over the years and see how he’s improved. “My goal is to do better work than we did the year before.” 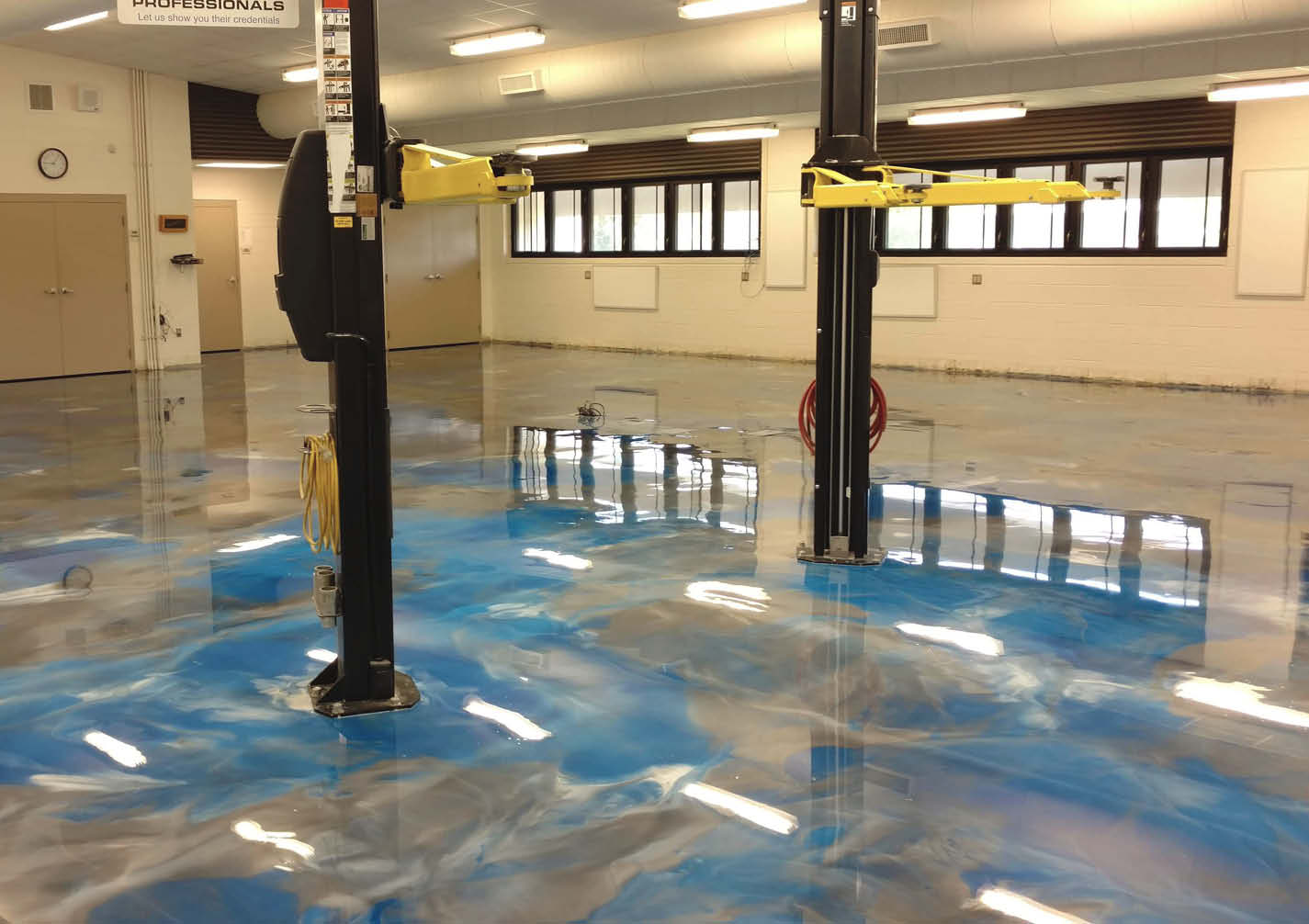 As for his favorite project, it was one of his earliest ones. The job was for the Holloway Tabernacle in Coffee Springs, Alabama, and it involved a stained and sealed 8-by-5-foot cross made from a handmade plywood stencil. “I believe in God and he blessed me with talents that have improved over the years,” Bayliss says.

He poured and textured the cross to look like wood and airbrushed it to give it shading. He also replicated a stained-glass window that had a beautiful dove and “got real close” to capturing the image in concrete. 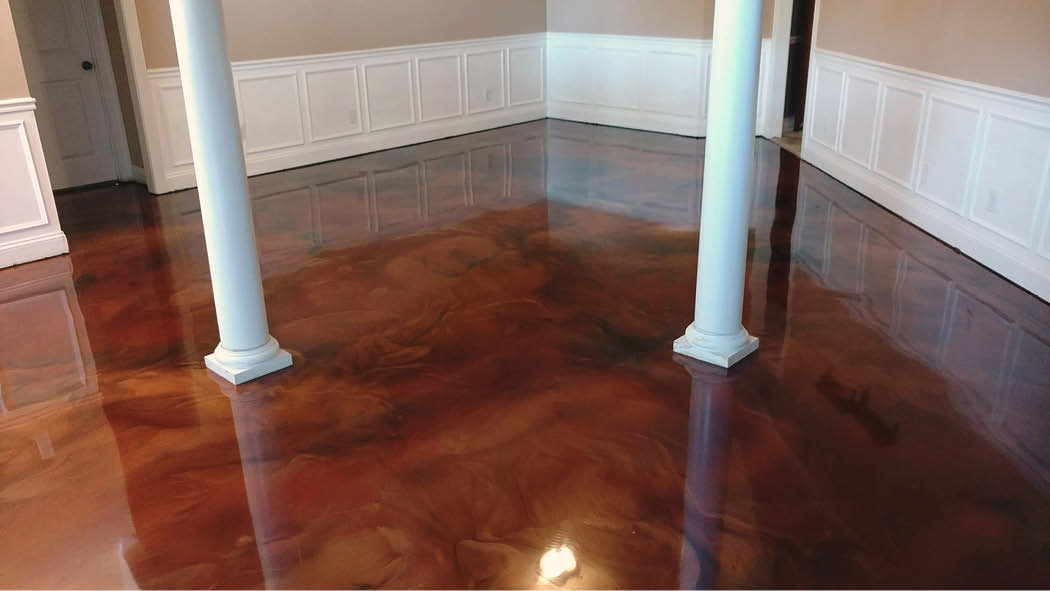 He closes with a final bit of sage advice, of which he was guilty of not heeding and had to learn the hard way: “Don’t take every job,” he says. “Make sure you’re comfortable with the job and have the budget to complete the work. If you don’t, you’ll get into trouble.” 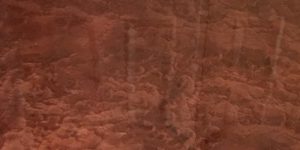 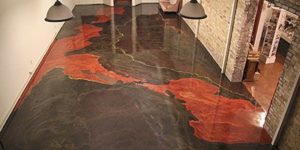