I met Roy Snowball, a kiwi from New Zealand, about seven years ago when he attended one of my acid staining seminars in New Mexico. I got into the business of staining as a fine arts painter who needed to make money doing something more salable than large, abstract oil paintings. To my delight I found that I could get paid to do large abstractions on people’s floors. In mixing and overlapping colors across the floor, I was opening up a new niche in the staining business, at a time when most stainers were working with one color only and staying within the lines of a geometric design.

Roy was entering the business from the other side — concrete placement. He had been pouring driveways, pool borders and interior floors for 30 years and his body was starting to protest loudly. He already had one torn rotator cuff from pounding and stamping and was working on his second.

Roy wanted to learn decorative staining in order to have a physically easier way to make a living. However, there was no one selling acid stains in New Zealand, so his first step was to manufacture his own stains and overlayment materials. He had always had a keen interest in chemistry, and he soon realized that he could push his stains into new colors and reactions with each other.

While I was discovering new combinations and dilutions using manufactured stains by several companies, Roy was making greater breakthroughs, because he understood the periodic table of elements and how an oxidizing agent could be added to a color to cause electrons to jump to a higher energy state, which could permanently change the color.

I traveled to New Zealand several times to tour that amazing country and also to collaborate with Roy in his studio. We found great synergy as we worked together on sample boards. Roy tended to pile one experiment on top of another and never took notes or photos along the way. He would often lose track of what he had done, which made certain effects difficult to replicate.

Roy never could explain quite how he got the dark blue on this round table, which was my favorite.

I insisted on being more methodical and would remove my gloves and scribble notes or take progress shots as we worked on four or five microtopped concrete backer boards at a time.In the frenzy of creativity, however, I also lost track of some important stages. We got great alfalfa prints the first time we tried using Roy’s gold stain, but couldn’t get such clarity on subsequent efforts. We often had our best luck when playing with a nonchalant attitude.

I introduced Roy to the use of faux “petrogyphs” made by etching away stain through a layer of felt. Then Roy showed me how complexity could be increased by staining, then applying a thin veil of microtopping and staining over that area with another color. This could lead to some wonderful misty imagery.

On our “Autumn Vista” piece (shown above and below) we experimented with leaves embossed into the wet microtopping, and we used liquid latex rubber as a resist to protect the leaves before spraying the area around them with an oxidizer (which is how we got the black accents). We also used a surfactant and some red dye on this board, which is about 30 inches by 40 inches.

Roy’s most recent efforts have been aimed at finding chemicals that are inexpensive and can make stain colors which do not yet exist, such as purple and red. He has made some progress with this, but we’re not going to give away all our secrets just yet. 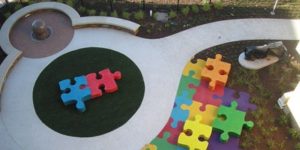 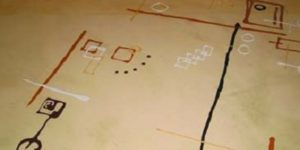