To loosely quote Theodore Roosevelt, nothing in the world is worth doing unless it takes effort. Take for example the Alila Marea Beach Resort Encinitas in San Diego, California, and its exquisitely stenciled polished concrete lobby.

“This hotel was challenging, as are many high-end structures,” says Mona Kharouba, superintendent for Suffolk, the project’s general contractor. “But when you throw in the complexity of completing this beautiful hotel amid a pandemic, building gets much more difficult. And much more rewarding.”

From the upscale spa and the stunning ballrooms to the restaurant and bars, the owners spared no expense, says Kharouba. Overall, “My absolute favorite part of this building is the polished, stained, stenciled concrete in the lobby.”

Surfacing Solutions Inc., led by Marco Loredo, finished the 4,000-square-foot expanse of decorative concrete in the lobby. The results bring so much life and beauty to the resort, Kharouba adds. “It ensures Aila Marea is inviting from the second you walk in to the second you end your stay.”

In addition to Loredo, the hotel design team deserves credit for creating the dazzling design. Kudos are also in order for the women who form the backbone of Floormaps in Rogers, Arkansas. The company helped bring the design to life with its custom-made stencils.

Floormaps makes its stencils with low-tack adhesive-backed vinyl known for its ease of release. Subsequently, the stencils leave behind less adhesive, while still achieving a crisp, clean design. The company typically makes custom stencils that measure up to 4½-feet wide by 10-feet long. Along with custom-made designs, Floormaps also offers a variety of 3-by-3-feet stencil kits, exclusively made for the Concrete Decor Store.

Simple instructions accompany the stencils, along with detailed images to help with the installation. If installers require extra help, customer service is just a phone call away. Floormaps also offers assisted installation, as well as training courses.

“The girls at Floormaps will bend over backwards to make things right,” says Keith Cantillon, COO of SSI. “We had a problem and they rushed out new pieces. We really appreciate their hard work.”

Shawn Halverson, CEO of SSI, says he was impressed with how his applicator was able to chase the stencil and move it under stairs and through railings. “It was a very difficult, very complex design. Marco had to apply the stencil when the rails were already in place.” His challenge also involved finding a repetitive pattern he could follow.

“He looked at how the floral pattern repeated and noted how the straight lines went in each direction,” Halverson says. The lines gave him his clues on how to most efficiently install the stencils.

But to further complicate matters, Halverson adds, “There was only one straight wall. Everything else was radial.”

Before applying the stencils, SSI polished the floors. It then took the SSI team five weeks to completely stencil and stain the design in the lobby. “We had to do it in six different sections,” Cantillon says, because they couldn’t occupy the lobby all at once. Once they completed the stencil install, they densified the surface and put down a guard.

The designers proposed a pattern both beautiful and complicated for the lobby. Luckily, they settled on a version where the pattern was four times larger than the original design. “Each petal was smaller in the original design and it was very busy. We were all relieved when they chose a larger format,” Cantillon says.

“We did five mockups before getting approval,” he says. At one point, he adds, they switched the white and gray coloring placement, which delivered a totally different look.

The men say they have used Floormaps stencils many times, with each one custom-made for the job. SSI’s clients typically supply the artwork and decide how many colors they want in the floor’s design.

“And Floormaps creates a stencil based on that,” Halverson says. The SSI team has been so thrilled with Floormaps’ products, as well as its customer service, that they now use its stencils exclusively.

Stencil Designs Mentioned in this Article 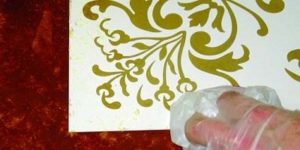 Smooth Sailing at the Yacht Hotel with Penetron Waterproofing Treatment 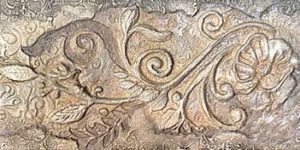