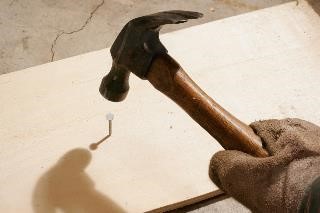 Concrete is not the easiest material to work with, especially if you’re trying to build a structure (like a house) that involves the use of both concrete and wood products. Fortunately, there are many ways to make the transition from concrete floors and wall frames to wood floors and drywall. Most masonry contractors have their favorites when it comes to attaching wood to concrete, but the newer members of the crew might not. The following is a breakdown of the pros and cons of four versatile fasteners most often used for attaching wood to concrete.

The easiest approach is simply to nail the wood to the concrete. Two common nail options are shown below: the cut nail and the concrete nail.

The cut nail has a square, tapered shape with a square tip. These nails are driven through a board and into concrete underneath, much like nailing a wood board to a wood floor. These nails are cheap, hold well (as long as they penetrate at least ¾ inch into the concrete) and are extremely hard to pull out.

Concrete nails are shaped like thick common nails. The shaft is surrounded with striations to improve holding power, and the steel is hardened so that it won’t bend when it hits the concrete. Like cut nails, these are affordable, hold very well and are difficult to remove. Both types require stout, accurate hammering and have a shear strength of 500 to 600 pounds.

Hardened screws can be driven into concrete as long as you first drill a proper-sized clearance hole. These screws come in a wide variety of shank diameters and lengths, along with several head designs, including Phillips, slotted and heavy-duty hex. Typically, a package of these screws comes with a masonry drill bit sized to the screw diameter.

To install them, position the wood part in place. Drill a clearance hole through the wood and into the concrete using a masonry drill. This is usually a much easier job than driving nails by hand. The shear strength is much higher, too — about two to four times as much, depending on diameter and length.

Because of the prevalence of concrete block construction, hollow wall fasteners come into play on many jobs. They are installed by drilling a hole into the block until a void inside the block is reached. Then the two side wings on the bolt are squeezed together and pushed into the hole. When they enter the block void, the wings spread out again and can’t be pulled from the hole.

These bolts are also used for hanging wood parts (along with light fixtures and shower curtain rods) in areas between wood framing members inside walls. Toggle bolts are stronger than nails, with a shear rating between 550 and 1,700 pounds, but they’re not as strong as concrete screws.

When fasteners are used to support horizontal beams on vertical surfaces, such as ledgers that support deck framing on the side of a concrete wall, they need to be strong. The best option for this work is to use steel anchors and matching lag screws.

These fasteners have shear ratings much higher than other choices — in some cases, up to 7,000 pounds. The anchors are installed in predrilled holes in the concrete that match the size of the lag screw being used. The anchor packaging identifies the correct screw size.

Because these anchors have relatively large diameters, a standard VSR drill with a concrete bit doesn’t match the job. A ½-inch hammer drill is a much better choice. These tools outperform regular drills because they have a hammering feature that makes the bit reciprocate in and out while it turns. This hammering action helps break up the concrete in the bit’s path, which makes it easier to drill away the extra concrete when attaching wood to concrete.

A concrete drill bit and a typical VSR drill are all that’s required to install concrete nails and screws — and even some small-diameter toggle bolts. The fastener packaging will explain what diameter bit should be used for the fastener to work properly.

Large-diameter holes are required for big toggle bolts and almost all anchors. Typically, these bits have carbide tips to prolong tool life and are driven with a heavy-duty hammer drill. This tool turns the bit as other drills do. But, it also has a percussion feature that makes the concrete easier to drill.

The fastest and easiest way to attach most wood parts to concrete is to use a powder-actuated gun. To use it, load a special gun nail and a .22 caliber gun shell into the barrel. Press the nose against the workpiece, pull the trigger and the shell will drive the fastener directly into the concrete. No predrilling or elaborate measuring and layout are needed to position the fastener — just hold the board against the concrete and fire the tool.

This gun costs more than a decent drill (as much as $200 more), but it makes light work of most jobs. Before you reach for this tool, read the operators’ manual carefully. This will ensure you’re using the correct amount of powder and the right size fasteners. Always wear eye goggles and ear protection when using a powder-actuated gun.

With the right tools and fasteners, it’s easy to fasten wood to concrete in home construction projects. 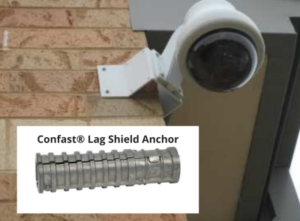 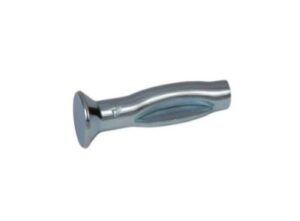 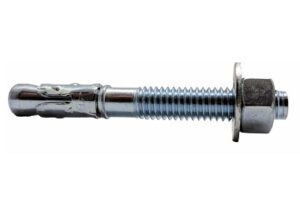 Heavy-duty Fastener for Anchoring to Infrastructure Concrete Base Materials