New Era for Epoxy: The Durable Coating That is Also Decorative 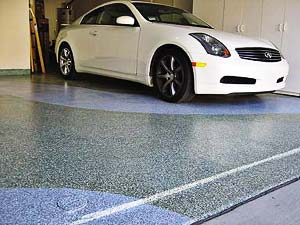 When Jimmy Tubbs, owner of Concrete Graphix in Camareo, Calif., gets tired of coaxing the same boring colors out of concrete, the decorative concrete contractor turns to tinted epoxy to jazz up his work. “I’ve opened up the book to anything now,” he says. “The sky’s the limit.”

To put the finishing touch on a concrete portrait of a hummingbird, he spread glittered epoxy on the stone bird’s belly, giving it a shiny, natural look.

This is a new twist for a coating that is rarely celebrated for its artistic qualities. Epoxies have been used for years on concrete floors in factories, hotel lobbies and other commercial settings because of their adhesion, hardness and resistance.

But innovations that improve epoxies’ performance have combined with a growing interest in their decorative capabilities to create a kind of renaissance for this industrial stalwart.

Tubbs is using it a lot these days in his less arty jobs as well. He’s laid down epoxy at the Irvine Spectrum shopping center, on floors at a Fatburger restaurant and a Trader Joe’s specialty grocery store, and to seal stamped stone on the shower walls of a house.

How does epoxy systems compare 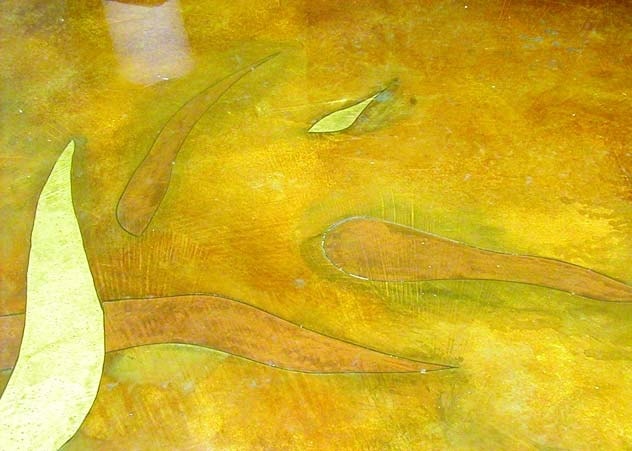 Epoxies are two-component systems — they cure as the result of a reaction between two substances after they are mixed. There are “single-component epoxies” on the market, but as Darryl Manuel, president of Vexcon Chemicals Inc., says, they aren’t really epoxies. “They’re alkyd paints,” he declares. “They don’t have the resistance of epoxies.”

Epoxies stand up well when compared to their competitors in the concrete covering field. They have several times the wear resistance of standard acrylics. They are more resistant to oil, gasoline and other abrasive spills than garage-floor paint. And they adhere to concrete better than urethanes.

The past five years have also witnessed a shift in home and garage decor from the monolithic gray concrete floor to decorative epoxy, he says. “Everybody is more interested in aesthetics now than they used to be.”

The residential market is showing fast growth, agrees Manuel of Vexcon, which introduced its PowerCoat Epoxy System in 1995. But the commercial side still has room to grow, he says, noting that epoxies cost three or four times as much per square foot as acrylics. “The market has been commercial because that’s where the value of the epoxy is versus other types of things,” he says. “The commercial people are going to pay for it. They don’t want to be shutting down the store to fix their floors.”

Mike Duarte, technical director for Versatile Building Products Inc., says the growing demand for epoxies in homes has been driven by contractors and clients, not manufacturers trying to expand their markets. 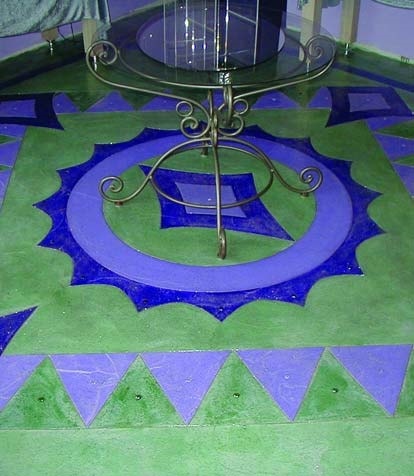 Using an expensive industrial-strength coating on a garage floor is often overkill, he acknowledges. But because labor and travel time account for so much of the bill on a job, buying a better sealer doesn’t raise the price much. And it can save the contractor (and the homeowner) a second trip. “You don’t want to be out resealing somebody’s house in two years,” he says. “You don’t want a callback either. You don’t want the sealer wearing off within the warranty.”

Besides, Duarte says, customers in the residential market want glossy surfaces — and, in his opinion, nothing delivers better than epoxies. A contractor can simply flood the floor, he says, and get a full film build, high sheen and a level surface in one coat. “You can’t really hide pockmarks with acrylics or urethane,” he says.

Special effects with epoxy
Contractors aren’t just drawn to epoxies because of their protective properties.

A plethora of pigments, flakes, powders and additives are available to give concrete floors different looks ranging from the stateliness of marble to the shimmer of a “candy-coated” hot rod.

The pigments on the market radically expand the color palettes of decorative concrete contractors, according to Lee Tizard, vice president of sales for flooring supply company Floric Polytech Inc. “You can change the integral color of the floor to almost any other color you want,” he says. 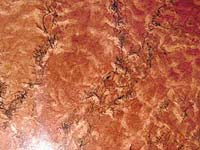 There are metallics, pearlescents that change color with the light, phosphorescents that glow in the dark, and fluorescents that strike the eye with vivid, glowing colors. Decorative epoxies are sold in flats, mattes and high glosses. 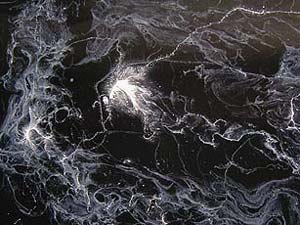 Chameleon glitter, like the kind used in custom-painting cars, can give the floor of a trendy nightclub or restaurant the head-turning ability to change colors as customers walk across it. From one direction it looks green, and from another, red.

Many contractors like to take it up a notch by adding metallic effects to their arsenal, says James Johnson, president of Las Vegas-based Floor FX. “Metallics are a unique option.” Floor FX offers metallic coatings that can be applied in one day. “We have an epoxy coating that looks three feet deep, but it’s only 16-20 mils,” Johnson says. “It looks so deep you could fall into it.” For extra protection, a second, clear polyurethane coating can be added for additional chemical and abrasion resistance, he says. 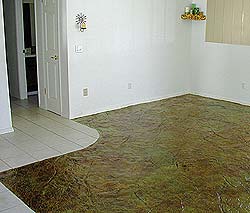 Contractors who sell these special-effects floors are making a killing, Tizard says.

“The materials cost might be double, but that still doesn’t warrant the extra $3 per square foot you’re getting paid. Obviously in time prices will come down. But it’s definitely something that’s very profitable, and it looks good.”

Even so, Manuel says that commercial architects often feel more comfortable than homebuilders experimenting with epoxies. “Their minds’ eye is a little bit better to see what they can expect with an epoxy,” he says. “It’s not the sort of thing you try and see if you like. They are very difficult to remove.”

They’re also harder to apply, especially for concrete contractors who are used to pouring acrylic into a sprayer to seal a back porch.

Is using epoxy on a floor harder than it looks?
Epoxy, a coating that cures, is more temperamental than acrylic paint, a liquid that dries.

“Typically with these things you just need a good clean surface,” says Darryl Manuel of Vexcon. But by clean, he means pristine. No powders, oils, acids or compounds that could disrupt the curing and bonding process. Often, the surface needs to be roughed. This can best be accomplished by shotblasting or grinding. 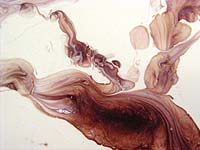 “Epoxy’s tough to bond,” says Tubbs. “The surface has to be clean. There’s a lot more prep work getting that stuff to stick.”

And epoxies have their limitations. Traditionally, their biggest liability has been their lack of breathability — the ability to let moisture vapor seep through them into the open air. When those vapors are smothered, something has to give, and it’s often the coating.

Moisture in concrete is one of the main reasons epoxies fail, says Manuel, noting that most epoxies cannot be applied on green concrete surfaces. Another is improper pH levels in the concrete.

Epoxies are also notorious for chalking and yellowing outdoors, but these days, there are exceptions. Aliphatic epoxies, unlike aromatic epoxies, stand up to the outdoor elements and, as a bonus, allow better gloss retention. Vexcon’s PowerCoat Epoxy System does not yellow or chalk even in aromatic form, has better breathability than a standard epoxy, and can be applied as soon as the concrete is troweled, Manuel claims 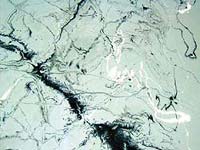 But nonyellowing epoxies introduced in the 1990s cost three to four times as much as typical epoxies, notes Essig. And epoxies have a tendency to show wear patterns, he adds. “The best epoxy is not going to match the abrasion resistance of the two-component urethane.”

Tubbs, owner of Concrete Graphix, once had to eat a $20,000 job because epoxy he laid on an acid-stained floor came up a year later.

Now, he takes no chances. He sticks to one brand he trusts. If an epoxy manufacturer doesn’t make acid stain, he says, it may not have tested its epoxy on acid stain. “There’s a lot of stuff out there that’s not that good.”

Duarte of Versatile urges contractors to find out if the companies that supply their epoxy employ a chemist and manufacture in-house. “These guys often have no manufacturing capability, no technical service,” he says. “Sometimes the company is just an ex-contractor. That’s the biggest thing we have to fight out there.” 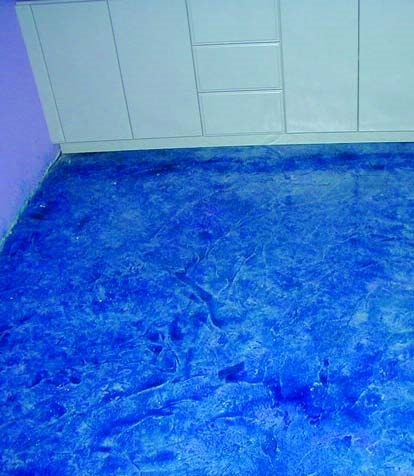 Epoxies should also be tested with a mock-up before they are used on the job, he says. “You need to know what you’re putting down and understand why you’re doing it.”

Tizard of Floric Polytech says one of the biggest problems for contractors lurks in the lips of their epoxy cans.

When a contractor mixes chemical “B” into can “A” and starts to mix the epoxy, some of the “A” material can surge up into the lip of the can and not get blended with the rest.

Then when the can is poured onto the concrete floor, the unblended material in the lip shows up as soft spots in the coating. “They don’t mix resin enough to get the uncured spots,” Tizard says. “That’s universal within the industry, that people make that mistake.”

His solution is simple — mix the epoxy in the source can, pour it into a second and mix again for about 30 seconds, then pour it into a third to carry it to the concrete surface.

Johnson has his own words of warning. “If the surface is deteriorated, thin mil coatings won’t camouflage that,” he says. “If the concrete is so bad it’s going to result in a failure two years down the road, walk away or replace the concrete.” 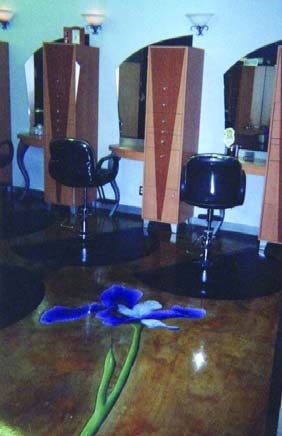 Tips for success when applying Epoxy
Tizard has a number of tips for coaxing flashy effects from an epoxy.

For example: When an epoxy with metallic additives is laid on a floor, the pigments can form lines like a mowed lawn.

To get a uniform-looking finish, Tizard recommends letting the epoxy cure for about an hour, then spritzing the surface with a dispersal agent such as alcohol or a flow and leveling agent. The tiny drops of fluid have a dramatic effect. “Each one is like dropping an atom bomb in a forest,” he says. The resin flows back into the small craters, but the pigments remain displaced.

Another tip: Lay a pigmented base coat down, then throw a coat of a water-based metallic on top. Spray the second coat with a liquid release, like one used for stamp overlays. “It gives a hammered bronze effect, like a hammered bronze sink,” he says. 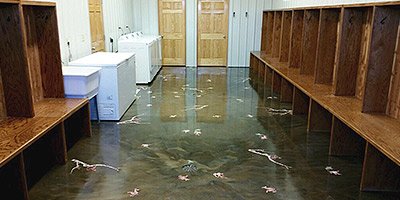 What started out as a once-in-a-lifetime hunting adventure turned into a friendship and a trophy-worthy job where contractor Matt Villella, owner of Sierra Concrete Arts in Saint Paul, Minnesota, bagged one of his most memorable projects to date.

Coatings for Industry has introduced a new high-performance epoxy coating that resists yellowing over the long term.