The Playa District provides a creative place for the tech community in Playa Vista to gather, relax and share ideas. The site redevelopment includes custom concrete elements such as fire features, seating areas, barbecues and planter walls. A six-building complex surrounds the site.

The most difficult portion of the project involved the S-shaped serpentine planter wall. Stretching over 200 lineal feet, it starts at 6 inches and tops out at 5 feet above grade. The intricate formwork included a 1-by-1-inch light niche blocked out 3 inches from the top. The crew placed and finished the wall the same day.

Located between two residential properties in Carlsbad, the beach access point on Ocean Street leads visitors to the beach below. It was part of the city’s overhaul of such properties degraded over time by the coastal environment. The project’s main challenge was limited access due to narrow beach community streets.

The project entailed redesigning the stairway to include seating nodes, overlook platforms and native California plants. The T.B. Penick crew integrally colored the concrete used for the stairs. At the landings, they broadcast a blend of seashells, crushed colored glass and crushed marble aggregate.

Twenty-five stencils, ranging from a 2-inch diameter to 34 feet, became the focal point of Edelman’s offices in Washington, D.C. The design reflected the capitol’s famous circles of Washington Circle, Columbus Circle and Dupont Circle. The flooring specification was a grind and seal, and there were three different types of stencil designs.

The simplest design involved staining 10-12 small stencils 2-5 inches in diameter throughout a 600-square-foot area. The second, more intricate set consisted of one large stencil 25-to-34 feet in diameter divided into 60+ vinyl sheets. These needed to line up perfectly. The third design, which looked like hexagonal tiles, covered a 350-square-foot area.

Hyde Concrete says its team spent as much time applying, staining and removing the stencils as they did grinding 12,000 square feet of mastic-covered concrete.

A near-acre-sized public plaza features “The Grand Staircase” that cascades down the side of a building, forming landscaped terraces and seating areas. Also called the Culver Steps, it connects to a four-story mixed-use building occupied by Amazon. The entire plaza sits over a new two-level underground parking garage.

A full-scale mockup helped Shaw & Sons build the complex, faceted steps while maintaining the refined surface finish. The finish is a white cement with a light acid wash.

The steps have no square walls; every form is on the diagonal. CAD drawings helped with the form fabrication.

Shaw & Sons installed 13,763 cubic feet of EPS foam under the steps. Additionally, the company paved 11,043 square feet of surrounding sidewalks. Instead of using the specified Ipe wood through the project, it used its fine-wood plank-finished concrete.

Instead of removing and replacing Seton High School cafeteria’s cement terrazzo floor, Hardig Industrial installed a polished concrete overlay. The original specification called for a decorative stain but the team explored integral color and revised the scope. Custom pigments were made, custom forms were cut with a water-jet and then the layout was poured in a three-color process.

The custom pigments were a test product. Subsequently, the installers had to adjust for different flow rates. They also had to pour two colors on the same day. As a result, this required partially pulling forms throughout the install to meet the tight construction schedule.

Originally, the Heritage Square Park splash pad design consisted of several gear sizes that each required its own custom stencil. The Sundek team worked closely with the architect on a redesign that used only two gear sizes. This change not only reduced the stencil cost but also reduced the labor associated with the intricate design.

The next challenge involved the vibrant colors chosen for the job. Sundek was good on the greens and oranges but the bright yellow tested its abilities. In the end, the team came up with the perfect shade that complemented the other custom colors. The project turned out better than what the client initially envisioned. 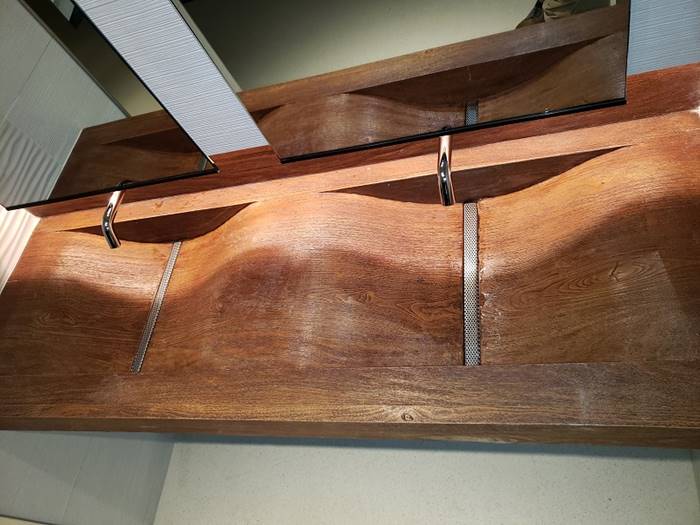 In an industry well-known for make-believe, it seemed only fitting for the Motion Picture Association of America to want concrete sinks that looked like wood. In particular, architects working for MPAA wanted two multiple-wave concrete sinks for a high-profile reception space in its new offices.

Hyde Concrete produced several mockups to prove its capabilities. The texture was the easy part, but it took multiple rounds to get the color just right. After nailing the look, Hyde Concrete then concentrated on fabricating this challenging, multidimensional shape. 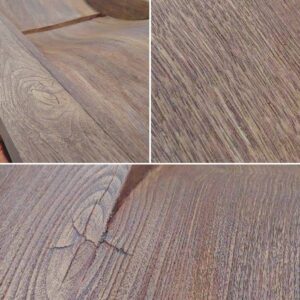 First, the team torched walnut and ran a wire wheel on both sides to achieve the desired texture. Next, they assembled several boards to make a master plug. On this, they cast rubber to make a sheet for molding the “face” they needed.

To get the wave, they fabricated wooden templates of the edge profile. They then cut the sink shapes out of foam with a hot wire cutter. Next, they built the sink frames with the shaped foam and melamine. And finally, they cut and skinned the frames to create the mold used for casting.

Once the molding was complete, they sprayed a light brown GFRC and applied stain.

SeaQuest, the only aquarium in Lynchburg, Virginia, is situated in an almost 40-year-old mall. Consequently, different tenants have leased the space over the years and the floor coverings have run the gamut.

Decorative Concrete of Virginia removed the old floor coverings and patched imperfections. Throughout the space, it also cut and patched trenches. These trenches accommodated the extra water lines and also the necessary plumbing. Per the owner’s request, the company concealed all patches.

SeaQuest consists of eight or nine different themed areas featuring 12 different colors of metallic epoxies, all poured wet-on-wet. As a result, this method doesn’t produce any hard seams between the colors.

The owners of the Hard Rock Hotel and Casino wanted a unique floor and Glossy Floor delivered. Featuring 6,300 vinyl 45-rpm records secured in place with epoxy, the +2,800-square-foot floor was two years in the making.

Glossy Floors’ biggest challenge involved placing records in a random pattern as the clients didn’t want anything symmetrical. Two very challenging ramps also caused some hand wringing. Then the crew had to figure out a way to keep the epoxy from flowing down to the bottom. Applying multiple thin layers of epoxy did the trick.

Another challenge involved transitioning from the record-covered section to metallic epoxy steps. The task seemed impossible but the installers somehow prevailed.

There were two winners in the project video category:

Decorative Concrete of Virginia in Lynchburg won First Place for a project video of SeaQuest.

The DCC is composed of contractors, manufacturers and suppliers of decorative concrete products. The council is dedicated to improving both the technical and business expertise of the contractors that pursue this specialty market.