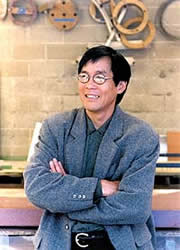 As residential architects go, Fu-Tung Cheng gets his name out there. He's won a myriad of awards, written a stack of books and seen his name published in an array of newspapers and magazines.

But despite Cheng's accolades, few people get to see his work. A well-designed home is, after all, still somebody's home. The only way his achievements can be enjoyed by the general public is when they are photographed.

So Cheng came up with a genteel solution — have the public over for tea.

Cheng is designer and part owner of Celadon, a gourmet tea shop that opened last summer in Albany, Calif., near Berkeley. "It was a chance for me to go pretty full-out on m 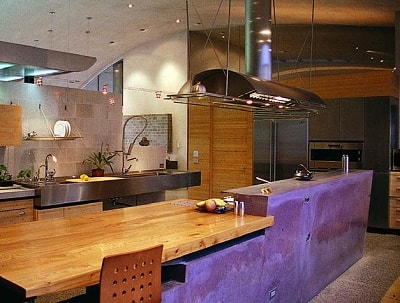 y own design in a public place," he says.

When Cheng wanted a centerpiece for his establishment, he turned to his specialty, concrete. The result: a cylindrical tea bar that flares at the top to provide counter space for eight patrons and a server. Customers' legs tuck cozily underneath the lip.

The distinctive shape of the bar was designed by Cheng to suggest traditional Chinese teaware. Molding the piece was a challenge, he says. But as with tea from hand-picked leaves, the extra work made for a finer finished product.

The project
Cheng intended the concrete bar to be the focal point of his tea shop. And as befits an anchor, it's massive and practically immobile, cast and cured on the spot. It weighs close to a ton and measures about eight feet in diameter, with a 43-inch hole in the center for wait staff. 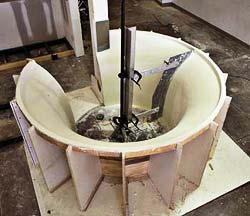 He acknowledges that it would have been cheaper to cast the bar as, say, a cone shape. "Even my guys were saying, 'Fu-Tung, just make it straight.'

But Cheng the shop owner gave the go-ahead to Cheng the designer. He says he's a firm believer in splurging on a couple of central design elements and keeping the rest low-key. "I do a lot of high-end design on those things that are important to me."

He was drawn to the flared top, which makes the bar look something like the top part of a golf tee, but with a more graceful curve. "I just thought it would be a more dynamic shape," he says.

To help him create the tea bar, he used NeoMix, a concrete countertop kit manufactured by Cheng Design for homeowners and contractors. The kit includes pigments, admixtures, finishing tools and decorative aggregates. Cheng selected a green pigment called "jade" to color the piece. 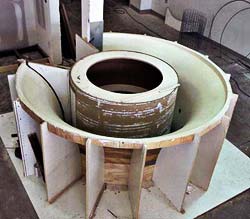 For concrete, he obtained about 25 bags of Quikrete 5000, a commercial-grade blend that is commonly available at hardware stores across the country. It costs more than other options, he says, but it's known for providing an even mix of cement powder and aggregate throughout each sack, a quality essential for this job.

To build a mold for the piece, he started with a frame of bamboo plywood from China. His choice of wood in his work has evolved, he says. He used to favor vertical grain Douglas fir, but switched to hemlock to avoid putting any more demands on dwindling old-growth forests. Bamboo, he's since discovered, is even more environmentally friendly — a mature forest grows in just five years, he says, and the plywood made from the harvested plant suits his purpose nicely. 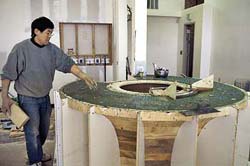 After securing the cylindrical wood frame with wire, he attached a piece of curved aluminum to an arm and mounted it on a pipe in the middle of the frame. He applied a layer of plaster on the inside of the wood frame and rotated the center assemblage to smooth it. Then he shortened the arm and put down another layer, then a third.

Finally, it was time for the pour. To keep the center hollow, he replaced the pipe with a length of Sonotube, a form for molding concrete columns.

Not everything went perfectly. Cheng applied a layer of drywall mud onto the plaster to get an additional degree of smoothness on the surface of the concrete. But the mud was too soft, he says. When he pulled away the framework, some of it stayed behind. "It never affected the concrete," he says, "But we had to do a little cleanup. It made it harder."

He would have been better off getting the same effect from a fourth layer of plaster spiked with retardant, he says. 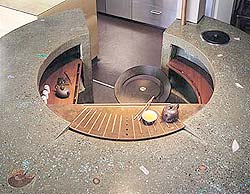 The bar cured for 10 days. Next came grinding, finishing, and the application of penetrating sealer and wax. And that was it. "We wanted a good finish," Cheng says.

Time for tea
With its vaguely Eastern shape, the tea bar reflects Cheng's design scheme for the whole establishment. It's concrete that makes a statement about culture. "I wanted to show that Chinese design doesn't necessarily mean red and gold and dragons all over," Cheng says. "There's an essence to Eastern design that can come through in a modern context."

The exotic flair of the concrete piece complements Celadon's menu, which features gourmet and whole leaf teas from China and Taiwan, with a few offerings from India, Korea and Japan added for flavor. 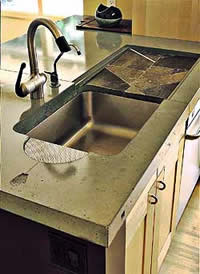 Tea's time has come, Cheng says. "Tea is where wine was in the 1960s. People don't know what good tea is yet. They just don't have a clue."

As for showcasing his design skills, the tea shop is proving to be a ripping success. Since it opened, Cheng has found he loves to just lay low and steep in customers' oohs and ahs.

"I sit at the tea bar like Norm in 'Cheers,' watching people come in and their jaws drop," he says. 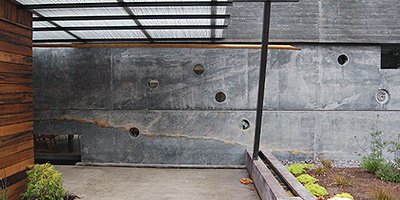 Decorative Concrete: Is it art? Or is it concrete work? 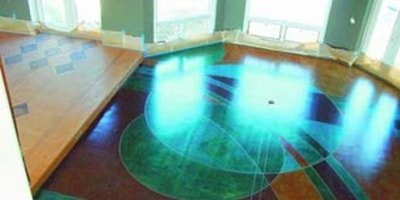 Concrete is being used as a final interior flooring surface in direct competition with wood, tile, marble, and slate. Concrete surfaces can be stained, scored, sandblasted, overlayed and stamped — or a combination of the above.