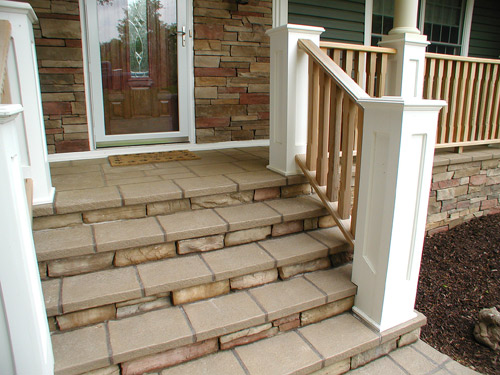 This West Milford, N.J., home has more curb appeal thanks to a cast-in-place overlay system over a wood deck.Photos courtesy of Unique Concrete

A couple of homeowners in West Milford, N.J., were looking to enhance the curb appeal of their house by enhancing the front entryway. They initially contacted us about the possibility of resurfacing concrete steps leading to the front door and pouring a new sidewalk from the driveway to the steps.

During the conversation, they mentioned their desire to have a covered front porch, but were worried about the possible costs associated with such a dramatic change.

We saw an opportunity. We could use our custom overlay product to create the illusion of a masonry front porch, which would get faced with cultured stone on all of the vertical areas. Our idea was to go in the direction of deck construction rather than block construction, then put one of our cast-in-place overlay systems over the wood deck.

Choosing a deck over block eliminated the need for large-scale excavation to pour footings. This was a major cost savings, since we are in a freeze-thaw environment and excavation would have to go down nearly 4 feet. Our way, all the deck contractor would need is a post-hole digger to remove enough earth to pour what would be considered typical deck footings.

This also eliminated the need to get another mason on-site to run up block and then fill in behind the block wall. Since we are able to do our cast-in-place stone over wooden structures, we were able to use the same product on the elevated area, the steps, and the sidewalk leading to the driveway. This creates a continuous look over all horizontal areas, which typically can only be offered over masonry substrates. With our deck construction process, we were able to save the homeowners thousands of dollars. 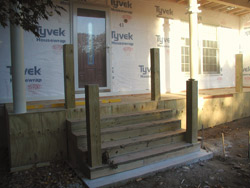 The process
The project began with a deck contractor removing the existing concrete steps, landing and bluestone sidewalk. He then determined the footprint of the new deck as well as the amount and placement of the footings that would be required to support it. The footings were dug, poured and inspected.

Once the footings were poured and the deck construction started, we came in to install a vapor barrier and pour a slab underneath where the deck and steps would go. When this was completed, he was then able to finish the construction of the deck, stairs, and the roof over the deck. This deck was built with 2-by-10s 12 inches on center, then wrapped with 3⁄4-inch pressure-treated plywood.

All wood substrates were then wrapped with tar paper in order to avoid direct contact with the wood and concrete, and galvanized wire lath was nailed into place on both the vertical and horizontal areas.

The next step was to pour our structural layer, which is heavily reinforced with PVA fibers and polypropylene fibers. This mix also utilizes several admixtures that increase the hydration of the cement and minimize the amount of water needed to make this high-fiber mix workable. After this mix is placed, it is scarified to ensure an excellent bond with our concrete overlay. This mix is applied to the deck and the steps at a thickness of 1 inch as long as there is pitch built into the deck. (If it is not, we must establish pitch in some way.) With the chemicals added to this mix, it is extremely moisture-resistant, which is a necessity when pouring over a wooden substrate. 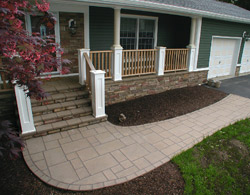 Once the structural layer is set, we were able to begin our formwork for the cantilevered edges on the deck and the steps. We could then begin pouring our decorative layer, which becomes the cast-in-place concrete “tiles.” This mix is very similar to the structural layer except for the fiber dosage and the integral color. The length and amount of fibers is reduced to allow for clean cuts from our stamping tools. We are able to use any one of our 25 different patterns as well as any integral color to achieve the final tile color and shape. Each one of the impressions made in the wet concrete is then grouted to ensure the realistic look of a custom handmade concrete tile. When the grouting process is completed, the entire surface is densified with a lithium siliconate, then sealed.

Thanks to the advanced mix and the densifying, moisture transmission is dramatically reduced.

All of the vertical areas of the deck, as well as portions of the house and garage, were then covered using cultured stone. By enclosing the area underneath the deck and covering it in stone, we were able to create the illusion of a masonry porch.

Benefits of Installing an Overlay Over Wood

It offers custom handmade concrete in an elevated setting. It’s a more expensive and impressive look than the plastic look and feel of many of the composites on the market.

It’s heat-resistant (much more than any composite and to a degree that rivals stone), which is great for areas that may have fire pits or grills. The concrete is rot-proof and insect-proof.

This process provides a waterproof area underneath the deck which can then be used during inclement weather (if the deck is on the second story) or just for storage. And there is no need for expensive gutter systems that are prone to clogging.

It offers the potential for a continuous look across all horizontal surfaces — which could include the deck, steps, patio, sidewalk and pool surround, and even the driveway.

We can control the water flow. When installing surface drainage, we can direct the water to drain to gutters, scuppers, or just over the edge.

Even though we are in a pretty severe freeze-thaw environment, we guarantee that the decorative layer will not delaminate from the structural layer. We have seen people try to place tile or stone outside in a method similar to how it would be installed on the second floor of a home inside. When those surfaces are done this way outside, it is only a matter of time before water gets in and freezes, causing delamination.

It holds up much better in severe weather environments, such as freeze-thaw environments and near oceans, than exotic woods and other decking alternatives do.

This product has been designed to not need resealing. While sealers offer better stain resistance and a sheen, they are not necessary.

Overlays never have problems with fasteners or nails popping. Also, no splinters.

We offer a wide selection of patterns and colors — many more design options compared to composite deck materials.

Construction costs can be much more affordable compared to building a traditional masonry or steel structure of a comparable size.

Drawbacks to Installing an Overlay Over Wood

It is very difficult to introduce a new idea to the marketplace — especially when the idea is placing concrete on a wood deck.

Our process requires special chemicals to be added to create a high-performance mix that will create a very water-resistant concrete. These chemicals can be expensive.

Our mix need high dosages of fiber to work properly. It’s the fibers that allow us to work at a much thinner thickness, which means less weight on the deck.

Getting material to the elevated surface is a task, and it needs to be done in a very efficient way since the concrete offers limited working time.