When contractor Richard Smith needs a tough, easy-to-repair coating on a hotel or apartment walkway, he starts scattering the color hardener. “It becomes very, very hard,” says Smith, based in West Hills, Calif. “It becomes a very, very wearable surface. It almost becomes like an eggshell finish.”

Like other concrete craftspeople, Smith still values hardener for its original function: making a concrete surface more durable and resistant to heavy traffic and other abuse.

But for a growing number of contractors, color hardeners aren’t just for hardening anymore.

“I’d say the balance of interest has gone from hardening to the dry-shake color aspect,” says Steve Johnson, marketer with Solomon Colors.

In the age of decorative concrete, the allure of “dust-on” has as much to do with its coloring properties as its ability to harden. Color hardener can, in fact, be purchased in just about any color a contractor can imagine, including uncolored. “We stock 40,” says Debbie Bliss of RAFCO Products, maker of Brickform color hardeners, “but we can make any color in the rainbow.”

Hardeners have other practical applications in decorative work, too. When stamped, their dense surface holds clear, sharp impressions. They are also used as lighteners, covering gray concrete with a more workable shell of a lighter color.

Color hardeners are made from cement, sand and pigment, with finishing agents, wetting agents or retardants added to suit manufacturers’ preferences.

The most common pigments are iron oxides. Contractors pay more for cobalt oxides, used in blues, and chromium oxides, which make greens. Titanium additives are used for whites and to lighten colors. “Organics” can make quirky colors such as ultramarine.

But the most important element in color hardener isn’t the pigment, says Joe Garceau, co-owner of Butterfield Color Inc. It’s the sand.

Quality sand should be hard and clean, he says. The grains should have angular shapes or hard edges like crushed quartz, not be round like silica. “Round aggregate doesn’t have good finishing characteristics,” he says. “The surface does not close as well. They don’t nestle into each other. They just continue to want to move as you trowel them closed.”

Another big factor is gradation, Garceau says. Most manufacturers’ sand mix recipes are proprietary, he says. “That is the secret. Everybody can buy cement.”

Hardener is usually scattered across a surface by hand or by brush, although machines are available for big commercial jobs. Water in the wet concrete bonds with the cement in the hardener after troweling.

The material is applied in two sweeps with spot follow-up, using about two-thirds on the first pass. The recommended coverage rate for Brickform is 60 pounds for every 100 square feet of concrete, Bliss says. With light and pastel colors, contractors may need to use more, she says, as much as 90 to 100 pounds per 100 square feet.

Distributing hardener is something of a skill. “How do you keep it even? You get good at it,” Garceau says.

Put it on too early, Bliss says, and it will not allow moisture to escape from the curing concrete, causing the solidified hardener to peel away. Wait too long, and the color will not be worked in properly, resulting in blotchy color.

Use too little, and either the gray will show through the hardener or foot traffic will wear it off. “I’ve never had a thickness problem,” Smith says. “I’ve had numerous failures not having enough. The secret to dust-on is, thicker is better than thinner.”

And if the dust-on is troweled before it becomes uniformly wet, lumps form, Johnson says.

Application is also affected by weather conditions and the kind of concrete used. Back east, for example, contractors often use air-entrained concrete, which cracks and crumbles less when it freezes. In those cases, a retardant is needed to keep the surface open long enough for the dust-on to set, Bliss says. “Even then there’s some technique involved. I’ve seen contractors stick their fingers up in the air to see if the humidity is right.”

When it comes to color, hardener faces some stiff competition from integral colors, which are mixed into the concrete before it is poured.

Johnson of Solomon Colors, for one, is sold on integrals. “If you’re asking me, absolutely, integrals are preferable,” he says.

Integrals require less manual labor, don’t leave airborne residue, have a greater chance of achieving a solid color, and don’t require access to every square inch of a slab’s surface, Johnson says. “I really don’t think the use of color hardeners is increasing much across the United States, but integral color use is increasing by leaps and bounds.”

Integral color is often used indoors simply because it doesn’t flood a site with loose powder. And because the entire slab is saturated with color, it holds up better to scrapes and chips.

But color hardeners offer more colors and snazzier effects, such as marbling.

They are less expensive than integral colorants, Garceau says. And, of course, they strengthen the slab’s surface. “Foot traffic causes more abrasion than vehicular traffic,” he says. “People scuff their feet. They shuffle.”

Dust-on colors are long-lasting, says contractor Richard Smith. When hardeners are used, the color of a section can be duplicated well after it’s been finished. “It’s easier to add to it because the color density hasn’t changed,” he says. “I would definitely, definitely go with a dust-on color. Most of my competition uses integral colors. But if the customer eventually wants to add something to it, or there’s a complication or failure, I can come back to the customer and say, no problem.”

What’s more, he says, contractors who work on big jobs must sometimes use concrete from different quarries with varying shades of sand. Color hardeners cover up the difference.

Contractors who opt for dust-ons also duck the costs that come with mixing a batch of colored concrete, Johnson notes. “Contractors don’t want to pay a cleanup fee. Ready-mix concrete makers can charge contractors $150 a truck to clean them out.”

Geography also influences the mix of the concrete. Maine concrete tends to incorporate particularly hard rock, Johnson says, while Illinois concrete contains porous limestone. “Because aggregates have different densities, you will get different amounts of bleedwater,” he says. “You have to alter the mix design of your base concrete in colder areas to use dry-shake color hardeners.”

Contractors often mix colors on the job. One technique, called “flashing,” involves laying down a base color, then scattering small amounts of others. “It kind of blends together,” says Las Vegas-based contractor Ron Garamendi. “You get a highlighted surface, with different shades, rather than a bland one.”

Garamendi, like many other contractors, has some favorite recipes. “I like the off-white color to start with,” he says. “And then I flash in some coconut, some coffee, a little bit of terracotta and a little green.” It gives the surface the look of “a nice natural slate,” he says.

Smith has a technique for antiquing the surface after applying hardener. Mix 20 parts water to one part color hardener, he says. Pour the mixture through a screen to take out the sand. Then spray the liquid onto the corners of selected tiles. This gives each tile an individual, weathered look, he says.

Bliss of RAFCO says her company does not recommend contractors mix colors by hand. “Job problems come back to the manufacturer,” she says. Instead, her company touts its own custom color service, which is no extra charge. “That way we’ve got recourse. We know what we did. We can track it back here.”

Garceau of Butterfield sees the issue differently. “I think anybody should be able to get as artistic as they want,” he says. “I think that’s what the industry’s about. Concrete guys are not as dumb as they are cracked up to be. They understand if they mix two colors together at a job site that the result of those two colors is their responsibility.”

How to use Color Hardeners for Coloring Concrete 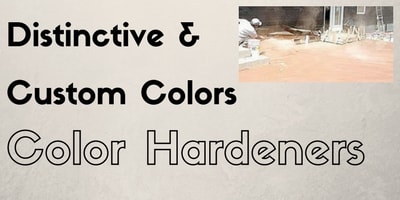 Use of various colors produce a more two dimensional (or realistic) look. They help to blend concrete to the environment or distinguish it from other construction materials. 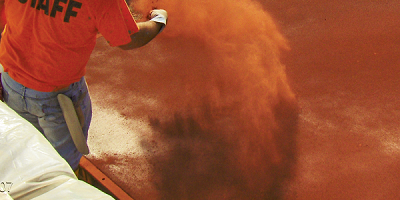 There's more to color hardener than color. The material inspires a chemical reaction, and it works best when worked in with a float. Timing is essential, and so are the right tools.