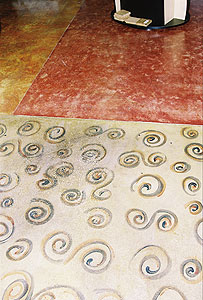 Dunk a roll of sushi in a Soy Sauce product and you're asking for one heck of a stomachache. But use the soy-based materials to strip, stain and seal concrete, and they are about as healthy as it gets.

Concrete artisan Dana Boyer is selling the soy-based line through her concrete contracting outfit, Concretizen. Developed by friends of hers at New Century Coatings and sold by several "private label" resellers, the products have been personalized by Boyer to fit her vision. She had been developing her own series of polymer-and-water-based stains, but when she saw what New Century had cooked up, she decided to sell theirs instead. "I liked their product, I liked the soy, I liked what it did," she says.

The Soy Sauce line includes a soy-based stripper and two clear sealers, one gloss and one satin. But nearest to Boyer's heart are the concrete stains, a proprietary blend of soy and water-based elements. Twelve Soy Sauce colors are available now, with six more on the way. "I'm tweaking and adjusting the colors to make them look more unique," Boyer says. 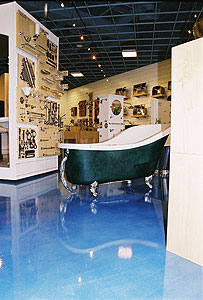 The colors can create a wide range of looks depending on the strength at which the contractor mixes them, Boyer says. Going easy leaves a look as soft as that left by an acid stain, but without the unpredictability. But at full strength, Soy Sauce is one of the more vivid water-based pigmented stains on the market, she says.

There is one unique thing about using Soy Sauce that contractors ought to keep in mind: The stain must be rolled or brushed on thin. If a job calls for a more intense hue, the directions call for several thin coats, not one thicker coat. A coat that is too thick will puddle and take a disconcertingly long time to dry, Boyer says. "They are applied in thin, even transparent coats you just work up until you are happy with the level."

Regardless, contractors working in schools, hospitals, or homes of people sensitive to allergens are among those who may embrace Soy Sauce. "It's a totally green product," Boyer says. "There are no polymers or water-based resins, unlike water-based stains."

Artists will love it too. "As an artist, I always create glazes and lay textures just like the faux painting skill I use," Boyer says. "This is just a little nicer product in that spirit, I think."

Soy Sauce stain can be used to touch up an existing acid stain floor, helping the contractor fix flaws and imperfections. It's not reactive, but it will penetrate, and in fact, it can even lend the acid look to a slab that is too tightly burnished to take acid stain. It can also be used on plaster or clay.

The Soy Sauce sealers and stripper complement the stains. The sealers, like the stains, go on thin and penetrate effectively. The stripper is less greasy and easier to clean up than other soy-based strippers, Boyer says.

Soy Sauce is only the first release in what Boyer expects to be a group of new decorative concrete products she is calling the "Boyer Line." Besides more Soy Sauce colors, she is currently developing water-based and solvent-based concrete dyes.

How to Remove Paint, Rust Stains, Adhesives & Oil from Concrete 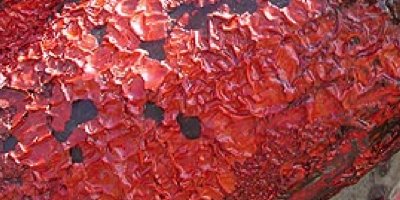 Many decorative jobs require cleaning up an existing slab. Here’s a look at products that remove paint, rust, adhesives or grease. 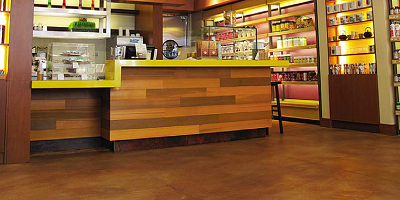 For a greener alternative to acid staining, SoyCrete Architectural Concrete Stain from Eco Safety Products offers the same variegated look in a product that's environmentally friendly in virtually every sense of the word.